("I'm awaiting the review of Asrar-i-Khudi. You must have seen the presidential address to the Congress by C. R. Das. He has presented the same spiritual principle in a political manner.")
(Iqbal, January 6, 1923)

The excerpt is from a letter written by Iqbal to a young writer, Abdul Majid Dayabadi, in Urdu. The reference is to the presidential address delivered at the 37th session of the Indian National Congress held at Gaya on 26th December 1922. 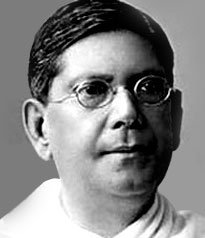 Chittaranjan Das, better known as C. R. Das (1870-1925), was one of the most prominent Indian leaders from Bengal. Just like Iqbal, Das was also a barrister, poet and politician. He became known as "Deshbandhu" (Friend of the Country) after successfully pleading the case of Indian militants in 1909. He was later persuaded by his close friend Muhammad Ali Jauhar to join the non-cooperation movement initiated by Gandhi in 1920, but he retained some of his own terms. These were explained by him most elaborately when he presided over the Gaya session of the Congress two years later while Gandhi was in jail. Notable among the younger admirers of Das were Hussain Shaheed Suhrawardy (later prime minister of Pakistan) and Subhas Chandra Bose, the beloved "Neta Ji" whose charisma was practically irresistible even for those who disagreed.


The presidential address of Das, to which Iqbal referred in the excerpt quoted above, may be summarized into four basic themes. The first of these may not be completely in sync with Iqbal's ideas, but the other three are among the finest elaborations of their common ideals:

1. "Law and order" is a fallacy promoted by tyrants and despots for enslaving people. Incidentally, this is an antithesis of what Iqbal had been promoting as "Islamic principles" of politics since 1908 (see, for instance, 'Political Thought in Islam' and 'Islam as a Moral and Political Ideal' by Iqbal). A detailed comparison of the ideas of these two great contemporaries may, in my opinion, give us insight into the roots of some very puzzling issues that face us even today.

2. It is impossible to attain freedom by violent means. Das quoted several examples from history to show that revolutions brought through violent means did not result in freedom: Magna carta, French Revolution and the Russian (Bolshevik) Revolution. Iqbal must have agreed most completely with this thesis (and it fully resonated in Iqbal's poem 'The Dawn of Islam' written less than three months later).

3. Individual, society, nation and humanity are interconnected in a spiritual manner. This is mainly the idea in which Iqbal noticed an affinity to his own philosophy. Of course, Iqbal did not presume that Das was in any way "inspired" by him or even familiar with his works (although Das was almost certainly acquainted with some of the works of Iqbal). Das actually quoted at length, with acknowledgment, from The New State (1918), a groundbreaking book by the American writer Mary Parker Follett. Follett had proposed a blueprint for a "spiritual" kind of "new democracy" in America, and a comparison of her book with the writings of Iqbal can bring a few more surprises (as I hope to show in the fourth book of Iqbal's biography which I am writing in Urdu these days).

4. A new plan of work for Congress. Das suggested seven fresh items for updating the original programme of non-cooperation. The first among these was "a clear and emphatic confirmation" of Lucknow Pact to safeguard the distinct identity of Muslims. Another interesting proposition was "the great Asiatic Federation" which, of course, would practically consist of a majority of Muslim countries. Das believed that "the Pan-Islamic movement which was started on a somewhat narrow basis has given way or is about to give way to the great Federation of all Asiatic people". Knowingly or unknowingly, Das was lending support to what Iqbal had stated a few months earlier in his Urdu poem 'The Khizr of the Way' (Khizr-i-Rah): "The salvation of the East lies in the unity of the international Muslim community, but the peoples of Asia are still unaware of this point"-
ربط و ضبط ملت بیضا ہے مشرق کی نجات
ایشیا والے ہیں اس نکتے سے اب تک بیخبر

Postscript: This post is far from comprehensive. It is just meant to point out some resources for further study: