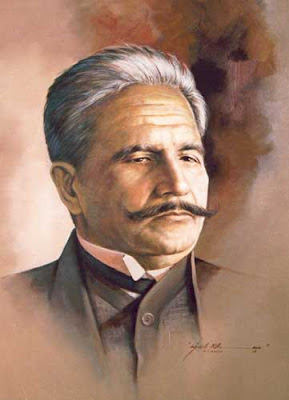 It is often presumed that Iqbal did not present his philosophy in a systematic manner. I also used to believe it once but then I realized that this could be true only up to the extent that the "system" of Iqbal's thought was presented in a manner not similar to many Western thinkers. Othewrise, there have always been those who believed that Iqbal had a well-developed system of thought - his constant companion of the last days Syed Nazeer Niazi and the first director of Iqbal Academy Pakistan Dr. Muhammad Rafiuddin, to name just two. I am now of the opinion that the nine questions and answers comprising 'The New Garden of Mystery' (گلشنِ راز جدید) in Persian Psalms (زبورِ عجم) can be treated as a succint description of Iqbal's philosophy.

A simpler answer could be that thinking is one of the functions through which the ego strives for perfection. Since the life of an ego is defined by ideals (and the collective ideals tend to be greater than an individual’s), thinking is helpful when it leads us to discovering and creating greater ideals and becomes an impediment when it prevents us from pursuing ideals, as Iqbal says in Urdu:

Answer. The universe may be constantly expanding and therefore boundless. It still has boundary, which lies within because at the centre of the universe is the Reality which never changes. Therefore, anyone who gets connected with the Ultimate Reality, i.e. God, can also grasp the entire universe including parts that are yet to be born – as Iqbal says in his Urdu verses:

Answer. Since God is the Ultimate Ego, He creates more egos which are the human beings. An ego cannot dissolve into its source, and hence the human beings cannot “annihilate” themselves in God (فنا) but they can witness their true splendour by connecting with the Creator, as Iqbal says in his Urdu verses:

Answer. “I” identifies an ego: you are an ego if you can say “I”. These egos are like sparks shedding from a great fire, which is Life. You travel into yourself by conquering the material and spiritual dimensions of the worlds, and when you return from a meeting with God in such a manner that you have Him in your heart and are holding His world in your hands, as Iqbal says in Urdu:

Answer. Ego is a part of the apparent world but is also greater than it. We reach it through the inner dimension of Life. In more practical terms, we reach the ego by submitting our individual self before the collective ego, as Iqbal says in his Urdu verses:


Answer. Our journey is from ourselves to ourselves: there is no end to it because our goal is to see the signs of God, and the eyes cannot get tired of visions – there will always be more for us to seek and behold. Therefore, the “perfected one” (کامل) is a person who has witnessed the signs of God and is therefore aware of the destiny of nations (the same concept was presented in the Allahabad Address as, “By leaders I mean men who, by Divine gift or experience, possess a keen perception of the spirit and destiny of Islam, along with an equally keen perception of the trend of modern history.”), as he also stated in his Urdu verses:

Answer. For centuries, Eastern heart and intellect were getting trained to perceive the world as illusion. What Hallaj said was just the kind of thing needed for awakening such a society. Iqbal elaborated this point further in his next book Javid Nama, where the spirit of Hallaj was presented as saying, “I saw a people who were turning away from life, so I decided to wake them up. They said they believed in God and yet they didn’t believe in themselves. How can you have faith in the Almighty without having faith in yourself?” It would be interesting to note that Iqbal saw his own mission as somewhat similar to that of Hallaj, as he says in his Urdu verses:


Answer. Complete awareness is to know that everything declines and dies in the temporal world but the ego can attain immortality through God, as Iqbal says in his Urdu verses: