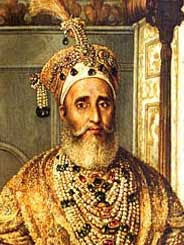 5. Ghalib, the Secrets of the Self

Mir Taqi Mir dissociated the values of Muslim society with the collective identity of that society, and hence the values survived even when that society was no more. The Mughal society at the time of Mirza Asadullah Khan Ghalib (1797-1869) was different from that of Mir Taqi Mir. It was no longer a candidate to power.

It was for Ghalib to reclaim the same values again - this time in the name of faith. “We believe in one God, and therefore to give up customs is our religion,” he said. “Nations, once they are no more, become articles of our faith”:

Mir had taken the liberty of calling himself an infidel. Since his visit to Calcutta in 1827, Ghalib assimilated all liberties within the folds of Islam and thus introduced a new collective identity for his people. It was an eclectic identity – “How about including hell in the paradise – to have more variety of landscape, if nothing else?”

The pivot of this collective experience is the ego of the individual. Once the ego is identified as an uncompromising monotheist it can expand in whichever direction it chooses. “Even in worship we are so independent and self-respecting that we turn back from the Kaabah if its door doesn’t open for us,” says Ghalib:

Yet, Ghalib was just synthesizing what had went on in the collective consciousness of his community before him – through Bhitai, Waliullah, Mir, Sachal Sarmast, Amman and many more, some of whom Ghalib may never have heard of. He was a link in the dream of spriritual social reconstruction: “These discourses on Sufism, and your manner of saying them, O Ghalib! We would have considered you a saint if you were not used to taking alcohol!”

You can listen to this ghazal of Ghalib online at YouTube, read his poetry at Allama Iqbal Urdu Cyber Library or find out more about him at Wikipedia.