"An election which is only a partial expression of the people’s will is null and void." (Hazrat Umar Farooq, r.a.)

This saying of the second caliph was cited by Iqbal in his paper 'Political Thought in Islam' (1908). How do the recent elections stand in the light of this saying? - blatantly rigged, voters stopped from voting or forced to vote against their will, and so on.

The purpose of beginning this post with that quote is to remind us that Islam of the free people is different from the religion of the slaves. It is comparatively more concerned with freedom of nations and civic liberties than worrying about the wardrobes of women or teaching the victims to show "compassion" to their oppressors. "Democracy, then, is the most important aspect of Islam regarded as a political ideal," according to Iqbal ('Islam As A Moral and Political Ideal'; 1909).

If Iqbal were alive today, he may have eagerly declared that the present protests against rigging were a step in the direction of establishing a truly Islamic society - and perhaps the most important step in that direction since 1949. It would not have mattered to him that the protesters are not using the name of religion. He would have repeated his words from some other occasion: "The Muslim [of this country], I believe, instinctively realizes the peculiar nature of the circumstances in which he is placed..." ('Islam and Ahmadism'; 1935).

"They would certainly impress [their people] more if they could show that their seemingly borrowed ideal of political freedom is really the ideal of Islam, and is, as such, the rightful demand of free Muslim conscience." (Political Thought in Islam').

Let's try to understand what he meant by "universal agreement" and how it can help us analyze the current situation in Pakistan.

Iqbal believed that society was like an organism, and "if one portion reveals a certain organic craving, the material to satisfy that craving is almost simultaneously produced by the other." ('The Muslim Community - A Sociological Study'). The example which he offered for explaining this was that the modernism of the Aligarh Movement was complemented by the healthy conservatism of Akbar Allahabadi. It is possible to conclude from this example that if we desire to find out what the Muslim community of British India collectively wanted in that period, we would have to place the ideals of the Aligarh Movement side by side with the poetry of Akbar Allahabadi.

There was no "agreement" between the two, but the collective will of the community resided in the point where these two contradictory ideas converged: preserving and strengthening the national character. Hence, this was the point of "universal agreement" even though the two schools of thought in the community appeared to be opposed to each other. 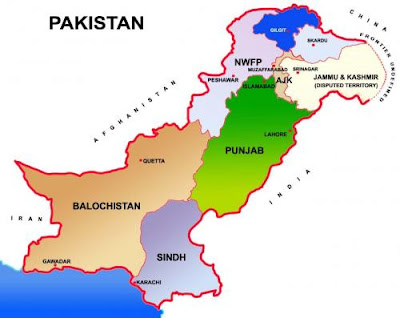 If we place the results of the recent elections on the map of Pakistan, we see a different political party coming to power in each province. Treating Pakistan as a single organism, we need not stop at this seeming conflict - especially if we have learnt anything from the aftermath of the elections of 1970, whose results may be faintly reminded to us by these ones.

From the perspective of the older democracies, the emergence of   mutually exclusive power zones may serve as a threat to the federation. Indeed, they may, if we repeat the mistakes of the past.

From the perspective of Iqbal Studies, this situation is an opportunity (and so was the situation in 1970-71),  for creating a prototype which could serve as the model for "a world-state [whose] structure will be determined not by physical force, but by the spiritual force of a common ideal." This idea, presented by Iqbal in his 1908 paper, perhaps deserves to be explored in greater detail now.
Posted by Khurram Ali Shafique at Sunday, May 19, 2013 4 comments:

People were enthusiastic because an elected government had completed its tenure for the first time in Pakistan and elections were now being held for a democratic transition of government. Unfortunately, news of massive rigging appeared before the process could be completed and some of the contestants announced boycott while demanding re-election on the seats where rigging had occurred. This was May 12, 2013, right? Wrong.

The first so-called elected government in Pakistan to complete its tenure was the PPP regime of Zulfikar Ali Bhutto in 1977. Elections were held for the national assembly on March 7, 1977, and the results were met with serious allegations of rigging. The opposition boycotted the elections to the provincial assemblies, held on March 10. A deadlock ensued and martial law was eventually imposed on July 5.

The election day this year was reminiscent of 1977 in some ways, although not as bad. It was different mainly because one major contestant could be trusted not to use rigging and un-democratic methods. Needless to mention, this was Imran Khan with his Pakistan Tehrik-i-Insaaf. This may have made a difference.

Throughout the past, almost every major contestant has been resorting to some show of force for intimidating their opponents during the elections. Since everybody was involved, it was very easy to blame the political culture of the country and to say that a nation like Pakistan could not have true democracy; that this is the best which we can get. This sentiment has been reflected in the life and work of those intellectuals who have been supporting various political leaders as champions of democracy without asking those leaders to refrain from un-democratic measures for seizing and holding power.

The same sentiment is reflected in the statements of the election commission, who are congratulating us on a "fair and free" election despite our first hand experience to the contrary. Clearly, these people think and have been thinking that the nation deserves no better.

The first lesson to be learnt from the recent elections is that we deserve better. We must concede that it is possible to have true democracy in Pakistan. If one political party can rely on purely legal means for securing a considerable share in the national assembly and a sweeping victory in a turbulent and traditionally backward province, why others cannot do the same?