Six years ago, I wrote a fantasy about the great Sufi master Maulana Rumi changing the world after being elected the ruler of a kingdom. From this fantasy was derived the title of my book as well as this blog and the newsletter: The Republic of Rumi.

The inspiration behind that fantasy was the fact that the foremost disciple of Rumi in modern times was Iqbal, and he is actually being recognized as a national hero in several states. Pakistan claims to have been conceived by him. Some of the Central Asian states acknowledge him as a national poet. In Iran also, he is held in high esteem. Hence, through Iqbal, the spirit of Rumi has actually been taking over the affairs of states since the middle of the 20th Century, at least in some ways.

This was the meaning of the fantasy which I wrote six years ago. At that time it was not possible for me to show how the message and the influence of Iqbal can be used for actually creating the kind of government, commonwealth or world order that may be called a "republic of Rumi". I think, now I am in a position to share some interesting findings in this regards.

I feel that it may be a good idea if this blog and newsletter could be used mainly for elaborating this concept at least for some time. I hope that this suggestion would be welcome by most of the readers - and I would like to hear from you what you think about it.
Posted by Khurram Ali Shafique at Sunday, March 31, 2013 4 comments: 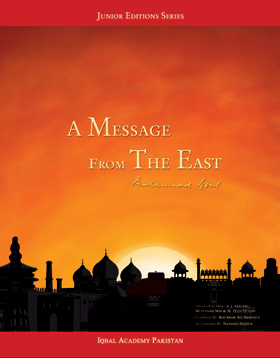 
Note: Since then, I have switched to "The Message of the East", which conveys the meaning of the original Persian title better.  At that time I was following Hadi Husain, who had styled it "A Message from the East" in his translation of the book.
Posted by Khurram Ali Shafique at Monday, March 25, 2013 1 comment:

Posted by Khurram Ali Shafique at Sunday, March 24, 2013 No comments: 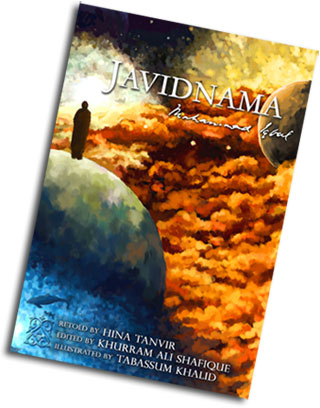 On a lonely evening, Iqbal meets Rumi. Together they embark on a journey to the end of the world and beyond - meeting those who cannot be seen, and those who are long gone. The worlds of spirit and matter combine, leading the poet into the presence of the Divine.

Javidnama was described by Iqbal as his "life's work" and can be justly regarded as one of the most important books of the modern times. This abridged edition presents the grand epic in simple contemporary English. 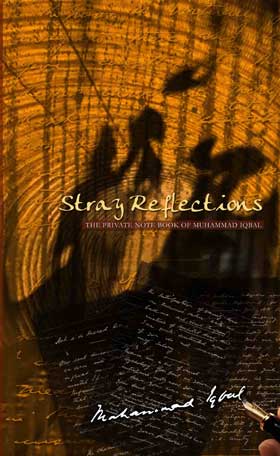 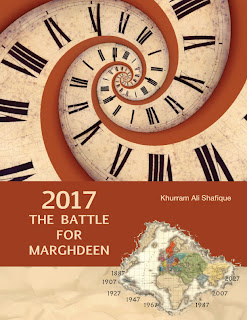 2017: The Battle for Marghdeen by Khurram Ali Shafique


Marghdeen is an ideal society conceived by Dr. Sir Muhammad Iqbal (1877-1938), a foremost thinker of modern times. It is a world where life is inside-out, people know their destinies and there is no poverty, neediness, crime or injustice.

In 2017: The Battle for Marghdeen, the author shows how such a society can be achieved in a short space of time, as long as we are prepared to change our perception about the world we live in. The book presents the basic principles for achieving Marghdeen, illustrated with examples from modern history. There is a special emphasis on societies that already acknowledge Iqbal as their thinker, but these principles can be applied anywhere in the world.

Shakespeare According to Iqbal 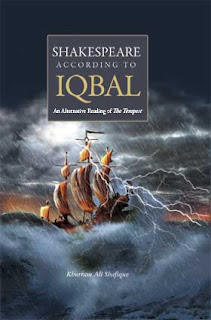 Shakespeare According to Iqbal: An Alternative Reading of the Tempest by Khurram Ali Shafique

Dr. Sir Muhammad Iqbal (1877-1938) was among those modern thinkers who had tremendous influence on the East, especially the Muslim world. He was also a great admirer of William Shakespeare, and unlike many of his contemporaries, his praise for the Bard was not riddled with skepticism.

Here is a pioneering attempt by historian and playwright Khurram Ali Shafique to revisit Shakespeare in the light of Iqbal's thought in order to discover some revealing connections between the work of Shakespeare and outstanding poets of the East including Nezami Ganjavi, Mawlana Rumi and Iqbal himself.
Partly written like an extended parable, this book is meant to be of some interest for the general reader as well as the expert in the field. 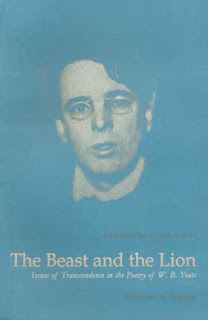 The Beast and the Lion: Issues of Transcendence in the Poetry of W. B. Yeats by Khurram Ali Shafique

First published in Pakistan by Iqbal Academy Pakistan in 2007


The poetry of W. B. Yeats is generally acclaimed to be representing the devastation, despair and decadence of the 20th Century. This groundbreaking study attempts to show that the vision of Yeats was grounded more in his philosophical premise than in the objective reality of his times. Contrary to the common perception of Yeats as a cosmopolitan visionary who has something to offer everyone, this study shows that the terror projected in such poems as "The Second Coming" was a fear of the political reawakening of the East!

Labels: Iqbal, The Beast and the Lion 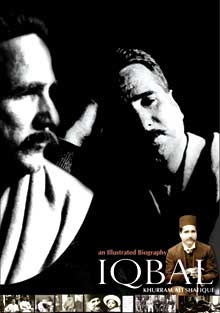 Recipient of the Presidential Iqbal Award


Believing in the elemental unity of matter and spirit, he pointed out that all humanity was one. Anything that divides the human race is evil and must be opposed. The ideal to be achieved is a world free from poverty and tyranny. He believed that it was possible, and offered a spiritual solution to achieve this end. His observations seem strikingly contemporary today.

This is the fascinating story of the life and times of the man who defied the cynicism of his age and upheld his belief in the future of the humankind, their glory and their possible immortality.

Iqbal: an Illustrated Biography is arranged like a library of information, visual and documentary records, and memorabilia about one of the most important minds of the modern times.


From the comment by Dr. Javid Iqbal
Printed on the back title

...This book is a commendable effort to bring together the various aspects of Iqbal in an interesting manner with visual embellishment. It is a one-volume encyclopedia of his life, work and times.


...The present book is an encyclopedic biography that covers all these aspects of the mind of Iqbal, without removing him from his various contexts: his time, his beautiful expression, and his unconditional faith in a common future for humanity.
Posted by Khurram Ali Shafique at Monday, March 18, 2013 1 comment: 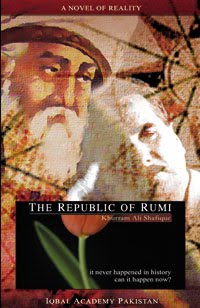 The Republic of Rumi: a Novel of Reality by Khurram Ali Shafique


Inside the Garden lies a secret as old as life itself but you must leave everything outside - even your previous knowledge. This is a fascinating voyage of discovery that stops at nothing short of reaching into the heart of the matter - and spirit.

What you will discover here may be of a permanent relevance to your life and life in general, which may be better explained now in terms such as the Five Wisdoms, the Seven Stages of the Journey, the Fountain of Life, Jamshid's Cup, the Dance of the Soul, the Falcon and the Leopard and, of course, Joseph!


Comment from Muhammad Suyel Umar, Director, Iqbal Academy Pakistan
Printed on the flap of the dust cover in the book

Khurram Ali Shafique is the first Iqbal scholar to have completed a much-needed requirement in Iqbal Studies that was being pointed out by the scholars for the last few decades.

It has been said about the Quran that "part of it explains other parts of it" and the internal coherence in the writings of Dr. Sir Muhammad Iqbal (1877-1938) had for long seemed to be inspired from this aspect of the Divine Word. The thread that runs through his poetry and the function of his lectures as an explanation of his poetry were all aspects that were touched in Iqbal Studies briefly but no has ever attempted to articulate the architectural whole of Iqbal's canon in order to show the intricacy of the design intended by the author himself. This is what Shafique has done in The Republic of Rumi through a narrative that is remarkably readable and accessible without losing the depth that should be expected in such a work.

This is a book for our times and of our times.

Comment from Ahmad Javed, Deputy Director, Iqbal Academy Pakistan
Printed on the back title of the book

This book takes you a long way on the path devised by Iqbal in order that Rumi's system of mysteries could seep into the deepest possible recesses of human consciousness.
Posted by Khurram Ali Shafique at Sunday, March 17, 2013 1 comment:

Labels: Iqbal, Republic of Rumi: a Novel of Reality 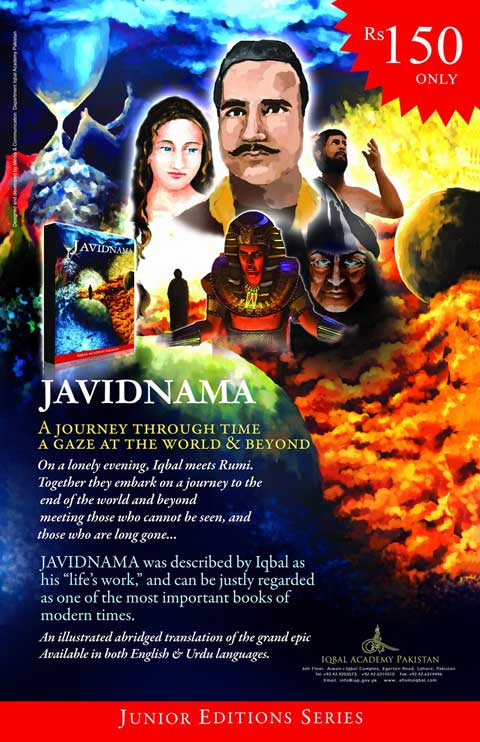 Posted by Khurram Ali Shafique at Sunday, March 17, 2013 No comments: