Self-Development through Iqbal
is a new online course from the Republic of Rumi.
Details shall appear on this page soon.
Note: 'Introduction to Iqbal Studies' is also being repeated on popular demand. See details.﻿
Posted by Khurram Ali Shafique at Sunday, July 03, 2011 No comments: 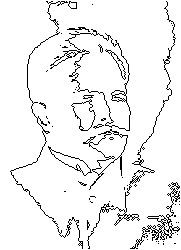 The online course 'Introduction to Iqbal Studies' is now going to be a regular feature of the Republic of Rumi and shall be offered four times a year according to the following schedule.
2011

The significance of Arabia as the cradle of Islam cannot be overstated. As such, the Arab World is mentioned throughout the works of Iqbal in endearing terms.

“It is only natural that Islam should have flashed across the consciousness of a simple people untouched by any of the ancient cultures, and occupying a geographical position where three continents meet together,” he states in ‘The Principle of Movement in Islam’, the sixth lecture in the Reconstruction (1930-34). “The new culture finds the foundation of world-unity in the principle of Tauhid.”
Apparently for this reason he advised his contemporaries to reconnect with the spirit of the classical Arabic poetry and expand their horizons beyond the Persian heritage (although the Persian heritage was deemed important in its own right).
However, a major thrust of Iqbal’s work is to rid Islam “of the stamp that Arabian Imperialism was forced to give it” (as suggested in the Allahabad Address). According to him, “early Muslims emerging out of the spiritual slavery of pre-Islamic Asia were not in a position to realize” that “in view of the basic idea of Islam that there can be no further revelation binding on man, we ought to be spiritually one of the most emancipated peoples on earth.”
Looking back at the more recent history, Iqbal believed that “the first throb of life in modern Islam” was the movement started by “the great puritan reformer, Muhammad Ibn Abdul Wahhab, who was born in 1700, studied in Medina, travelled in Persia, and finally succeeded in spreading the fire of his restless soul throughout the whole world of Islam.” According to Iqbal, “the essential thing to note” about the Wahhabi Movement is “the spirit of freedom manifested in it, though inwardly this movement, too, is conservative in its own fashion…. [since] its vision of the past is wholly uncritical, and in matters of law it mainly falls back on the traditions of the Prophet.” (Perhaps in this matter the legacy of Abdul Wahhab can benefit from the thought of his South Asian contemporary Shah Waliullah).
Posted by Khurram Ali Shafique at Saturday, July 02, 2011 No comments:

Europe, East and the Muslim East

Regarded from a purely literary standpoint, the debilitation of the forces of life in Europe after the ordeal of the [First World] war is unfavorable to the development of a correct and mature literary ideal.

Indeed, the fear is that the minds of the nations may be gripped by that slow-pulsed Magianism which runs away from life’s difficulties, and which fails to distinguish between the sentiments of the heart and the thoughts of the brain. However, America seems to be a healthy element in Western civilization, the reason for which perhaps is that it is free from the trammels of old traditions and that its collective intuition is receptive to new ideas and influences.


The East, and especially the Muslim East, has opened its eyes after a centuries-long slumber. But the nations of the East should realize that life can bring about no revolution in its surroundings until a revolution takes place in its inner depths and that no new world can take shape externally until it is formed in the minds of men. This ineluctable law, which has been stated by the Quran in the simple but eloquent words, ‘Verily, God does not change a nation until it changes itself’ governs both the individual and the collective spheres of life; and it is the truth of this law that I have tried to keep in view in my Persian works.
Iqbal, 'Preface' to The Message of the East (1923)
Posted by Khurram Ali Shafique at Friday, July 01, 2011 No comments: