WILL DURANT: Knowledge and the common person 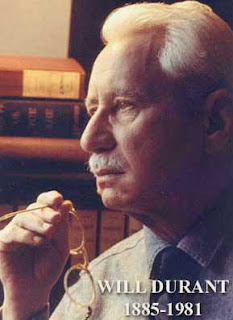 For, if knowledge became too great for communication, it would degenerate into scholasticism, and the weak acceptance of authority; mankind would slip into a new age of faith, worshiping at a respectful distance its new priests; and civilization, which had hoped to raise itself upon education disseminated far and wide, would be left precariously based upon a technical erudition that had become the monopoly of an esoteric class monastically isolated from the world by the high birth rate of terminology.

The quotation is from the preface to the 1933-edition of The Story of Philosophy (1926) by Will Durant. The picture is from the website of Will Durant Foundation, which is a good place for finding out more about the American philosopher.
Durant was quoted by Iqbal (not the excerpt given here) in the article 'Islam and Ahmedism' published in January 1936 in reply to a series by Pundit Jawaharlal Nehru.
Posted by Khurram Ali Shafique at Wednesday, November 02, 2011