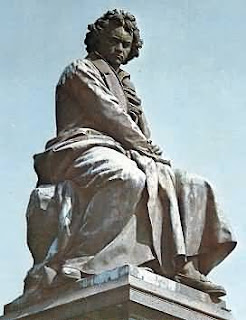 The four-note opening motif of this symphony counts among the most widely heard music in the world. As such it may be regarded as the symphony that defines Beethoven to most people in the world, especially those who don't know him otherwise (whereas for the critics the greatest work of Beethoven remains, of course, his final symphony).

The symphony was first performed in Vienna in 1808. It is said that it wasn't well received in its first year but ever since then it has been applauded in extraordinary terms such as those employed by the fellow German composer E.T.A Hoffmann (1776-1822) just a year and a half later: "Radiant beams shoot through this region's deep night, and we become aware of gigantic shadows which, rocking back and forth, close in on us and destroy everything within us except the pain of endless longing..." A little later, in 1813, Hoffmann again described it as leading "the listener imperiously forward into the spirit world of the infinite."

Beethoven himself is reported to have said about the famous four-note opening of the symphony: "So pocht das Schicksal an die Pforte! " (That’s how destiny knocks on your door). On the authority of this saying attributed to the composer, the symphony is also known quite commonly as The Symphony of Destiny.