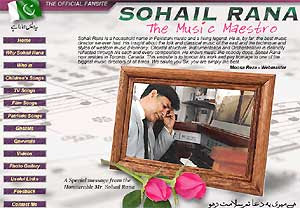 My previous post 'Choral Symphony in Miniature' appraising a Sohail Rana composition was forwarded to Mr. Rana by Moosa Reza, who runs the official fansite. Glad tidings, a comment was received the same day:

Further to my earlier response to you with reference to Mr. Khurram's article on me and his recent appraisal of my composition Akele na Jaana from Arman (female version), here are some points that I wish to communicate to you and through you to Mr. Khurram and all my fans and well-wishers:

1) When I started composing and arranging "Akele na Jaana" in 1965-66, I certainly had the symphonic structure in my mind because the film, at that time, did not allow me to go beyond 3 to 4 minutes per song. Subsequently, I had to restrict myself to that length of Intro, Interludes and the Finale. I feel elated that my work, though it was appreciated by the masses and the connoisseurs, it was also understood and appreciated by persons such as Mr. Khurram. I was also honoured by music Composer Rafiq Ghaznavi sahab, ustaad Salamat Ali Khan sahab and many of my contemporaries by their appreciative comments.

2) Inspired by Tchaikovsky, Mozart and Rimsky Korsakoff, I also wrote, arranged and performed one Ballet "Heer Ranjha" in 1973 during my tenure as Resident Composer with PIA Arts Academy. Mr. Zia Mohiuddin and I discussed this and we instead of calling it a Ballet, called it "A Poetry in four movements". The first performance was at Intercontinental Hotel Karachi, before the then President of Pakistan Mr. Z.A. Bhutto and a group of scientists from Canada. It was well applauded. This was then performed almost all over the world where we had toured particularly in China, Korea, Russia, France, Spain, Tunisia, Morocco, Algeria, USA and Canada.

3) I also wrote a Symphonietta "Anar Kali" which I recorded with not a huge orchestra in Pakistan (as this was not possible). I released this in the audio channels of PIA's In-flight music. I have been wishing and hopefully may be able to record this with a proper Symphony Orchestra in this part of the world. Other than this I have been working on "Tariq Bin Ziad", "Umar Khayyam" and "Rumi". I hope I am able to accomplish this as soon as it is possible.

4) Recently in May' 2006 here in Toronto at the Living Arts Centre, I composed, arranged and conducted yet another Symphonietta "Bhairveen in C# Minor" performed by my trained team of boys and girls, which also was well acclaimed. This was during my programme "Sohail Rana Night 2006".