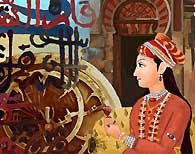 In the preface of the Reconstruction, Iqbal mentions the need for a modern method through which we could have “a living experience” of the kind of biological unity embodied in the following verse of the Quran:

Iqbal specifies the following characteristics of such a method:


Despite giving these hints, he doesn't specify the method but in the next document which he wrote after this, i.e. the Allahabad Address (in which was offered the concept of Pakistan), he says:

Obviously he is referring to the same verse which was quoted in the preface of the Reconstruction but he doesn’t repeat the verse itself, as if he would like the reader to consult the other passage together with this. He goes on to say:

“Why cannot you who, as a people, can well claim to be the first practical exponent of this superb conception of humanity, live and move and have your being as a single individual?”

It seems obvious that the method through which this “superb conception of humanity” can be experienced is this: an entire nation should “live and move and have your being as a single individual.”
The unity of nation in this sense is organic, is related to the unity of humanity and is ultimately derived from the Oneness of God. Nation in this sense cannot be forged by color, race, territory or culture. These factors may also play some role but the unity does not depend on them. Rather, it regulates them in the forward march of history towards “a final combination of humanity.”

This is a follow up on issues discussed in previous posts: 1. Unity of life; and 2. Unity of humankind

Picture is a detail from illustration by Tabassum Khalid for Secrets and Mysteries by Dr. Sir Muhammad Iqbal