Ibne Safi as a social reformer 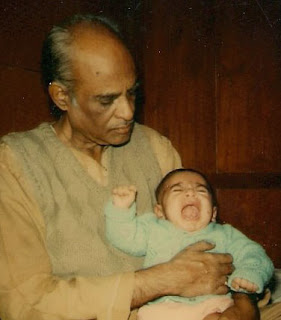 The following recollection about Ibne Safi has been written by his illustrious son Dr. Ahmad Safi (on my request, may I add with pride) - Khurram Ali Shafique.

My father my guide…

People have lately been discovering Ibne Safi as a reformer and finding out about his services in this regard through his writings. As a son I witnessed this side of his personality very closely. Abbou [Father] was a reformer indeed.

I remember, during the few months break that I got after my F.Sc. exams, I took to the leftist thought and literature. This was mainly under the peer influence. Like many of my close friends, I started learning more about Communist and Socialist movements. In the late seventies the relevant literature was readily available and to be interested in such things was in vogue.

In our household we were allowed to read any kind of books we wanted. There were no restriction and we never had to hide any books we were reading. One day Abbou saw me setting some books on shelf. Those were by and about Vladimir Lenin, the Russian revolutionary, politician and political theorist. Upon Abbou’s enquiry, I told him I was particularly impressed by Lenin’s policy on dissemination of education and thought this could be adapted for Pakistan. I said this and some more on the topic just to impress him but he cautioned me softly. He told me not to be impressed by any literature or ideology without first checking out what our religion had to offer. According to him this would give me something for comparison – and then I should be free to form any opinions and make decisions accordingly.

I thank Abbou for putting me on the right path. I took the advice and found out that indeed I had a very rich religious tradition and all other isms and ideologies proved to be mere subsets in terms of thought and ideas.

I see this character in his writings all the way as well. He never pushed his ideas on his readers but showed them the path and educated them. That is why his readers could make intelligent decisions and take the ownership of those too.
Posted by Khurram Ali Shafique at Tuesday, June 19, 2012