The Principle of Collective Self-Development 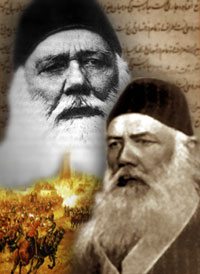 “We should meet and convey to each other our opinions regarding education and progress of the nation. Whatever mistake there might be in our thinking should get corrected through the opinions of others.” This was the golden principle by following which we acquired a sovereign state. We are on the verge of losing all because we abandoned this principle and still seem to be forgetting it.

The year 1887 has been adopted as the starting point for this overview of history because the year started with a unique New Year resolution made by 67 representatives of the Indian Muslim community. They had gathered at Aligarh on December 27, 1886, coming from all over the British India and including among themselves knights and nawabs as well as primary school teachers and ordinary people. Some 70 students of the Aligarh college were also asked to be seated in the hall where Sir Syed Ahmad Khan presented the issue in these words (originally in Urdu): “Although we are called a nation, we are unaware of each other’s circumstances, as if we were different peoples.”

The participants wanted to realize a Muslim nationhood. To this end they agreed to hold annual gatherings where the community could reach consensus on matters of national importance. The organization holding these sessions, each year in a different city, was to be called Mohammedan Educational Congress (later changed to Conference). It came into being on December 27, 1886.

This event may qualify as a starting point because, although the idea of consensus was rooted in the Quranic instruction that believers should consult each other when deciding important matters, no Muslim community after 7th century AD had been able to make its own consensus the final arbiter, since monarchs had come to hold sway after the Pious Caliphate of the early period.

Hence the resolution of 1886 was the beginning of a new chapter, not only in India but across the world. The text of the resolution could be translated as:

In view of an overall decline in education among Muslims, and with a mind that efforts should be made for progress in all forms of education through a national consensus and by taking national initiatives, it is desirable that a session called Mohammedan Educational Congress, comprising people from several districts, should be held every year for deliberating on such matters. This session shall not be held at a fixed place but held each year at a place whose residents are willing to make arrangements for it.

The rationale behind founding such an organization was, in the words of Sir Syed, “that we should meet and convey to each other our opinions regarding education and progress of the nation. Whatever mistake there might be in our thinking should get corrected through the opinions of others.”

This became the guiding principle for the Indian Muslim community and eventually led to the creation of an independent state. In retrospect, the major implications of this principle may be listed as follows:


From 1887 to 1953, the nation was seldom without leaders who upheld this principle explicitly and respected its implications – Sir Syed Ahmad Khan, Muhammad Ali Jauhar, Allama Iqbal, Quaid-i-Azam Muhammad Ali Jinnah and Liaquat Ali Khan, to name just the most prominent ones. Looking back at the goals adopted and achieved at each stage in that period, we may notice two important things: (a) the goals were not proposed on behalf of a particular class but rather the entire community; (b) they were subject to modification through collective decision-making. Here is a brief overview:
The fourth goal was also significant in the sense that a state formed in the name of God enabled the community to extend membership to like-minded people from other faiths on terms of complete equality: “Hindus will cease to be Hindus and Muslims will cease to be Muslims…”.

Perhaps it was a disastrous oversight that when the early historians and educationists of the new country reviewed the nation’s history, they defended such landmark decisions either by presenting rational arguments or on the authority of national heroes. In the process, it was overlooked that regardless of who made a proposition and by what argument it was supported, the decision had always rested with the entire community.

It seems that sometime around 1953 the Pakistani intelligentsia lost sight of this basic principle which had been guiding the course of collective self-development. Instead, our educated elite attempted to understand history by analogies of other forms of government such as the classical model of Arab imperialism, the “older democracies” of the West, and the communist republic.

Is it possible, therefore, to distinguish between Pakistan as perceived by the educated elite and Pakistan as lived by the masses? This seems to be the case, especially if we take a closer look at the two phenomena through which the principle of consensus-seeking seems to be dividing our history into twenty-year stages of self-development. These phenomena may be called the “peak moments” and the “turning points”.
Posted by Khurram Ali Shafique at Saturday, June 16, 2012