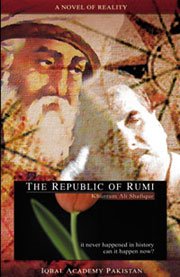 Labels: Consensus, Republic of Rumi: a Novel of Reality