This is a series of blogs about the creation and philosophy of Pakistan and its key actors. These accounts are based on historical facts and references are linked at the bottom 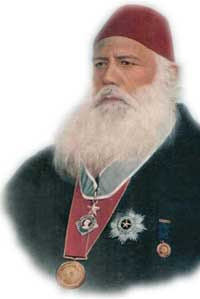 In 1867 started an unpleasant controversy about whether Hindi should replace Urdu as the common language in India.

Syed Ahmad Khan (later Sir), a former civil servant from Delhi and now an educationist and reformer, prophesied that the differences between Hindus and Muslims would keep increasing (although he wished otherwise). He sensed a risk that his community may get subverted by the British rulers and/or assimilated by the Hindu majority.

The solution which he suggested was a bit of a surprise for everyone: modern education on Western lines. Why?

It seems that Syed had realized that the last missing link in fulfilling the dream of Shah Waliullah was modern science and rational thinking, which the unwitting British had brought to the doorsteps of Islam:

Nature not only imprints upon our minds her own truth, but it also points out another principle, according to which we may direct our actions and thoughts; and as Nature is true and perfect this principle must necessarily be true and perfect, and this true and perfect principle is what we call religion… I hope that every lover of truth, while giving me credit for my conviction, will candidly and impartially investigate the truth of Islam.

You can find out more about Sir Syed Ahmad Khan at Wikipedia.

Next: Sir Syed, an Inquiry