Jauhar: the Choice of the Turks 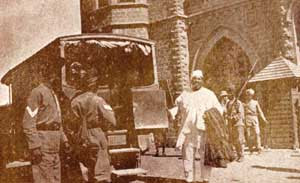 We hear about people condemned for starting wars, but Muhammad Ali Jauhar (1878-1931) was tried and imprisoned for attempting to stop a war: the First World War (1914-18)!

In 1914, Britain wanted the Ottoman Empire to fight on its side and the London Times wrote a leading article to this effect. As a subject of the British Empire, Jauhar could not openly ask the Turks to stay away, so he offered a balanced advice in a 40-column long article in his English daily, Comrade, on September 26, 1914.

The newspaper was banned, Jauhar was detained for most of the duration of the war and the article was never allowed to be reprinted during the British Raj. It was reprinted for the first time after 1914 in the anthology edited by Dr. Afzal Iqbal in 1987. Here is an excerpt:

We desire from the bottom of our heart that this may be the last of the wars, and that human intelligence and human sense of justice may never know such constantly recurring eclipses. But we are bound to admit that as things are today there are some things worse than war. We shall not, therefore, pretend to believe that the Turks must have peace at any price. They must beware of entering into a quarrel, but once in it they must not come out of it till the claims both of honor and self-interest are satisfied. God knows they will have enough occasions to fight, for they have to contend against numerous army corps of prejudice and passion. That is all the more reason that they should fight only their own battles and not those of another. At present the fear is that they may be led into the firing line in a quarrel only outwardly their own. The Turks are not wanting in gratitude. In fact, few nations could equal the Turk in those characteristics which have extorted for him even from his enemies the title of “The Only Gentleman in Eastern Europe.” To quote the old Arab saying mentioned by Gibbon, their women know not how to grant favors and their men know not how to refuse. Every Indian whom we know who has had any relations with them is loud in praises of their courtesy, which is as natural to the peasant as to the price. But if courtesy is one of their qualities, they also possess the defects of that great quality. In matters of business they are imposed upon, and often imposed upon knowing that they are being imposed upon. Now nothing is a more serious business than war in which a nation can destroy in a month in the way of life, energies and resources what it had taken a generation to build. The Turk knows not what fear is, but life can be valueless only to those in the lowest scale of humanity. It is a rich treasure and a divine gift which we are not permitted by our Maker to squander. We must learn in war even more than in peace the importance and value of economy in human life.

Picture shows the "Ali Brothers" (Jauhar and his elder brother Shaukat Ali) being transported by police on a later occasion, 1921