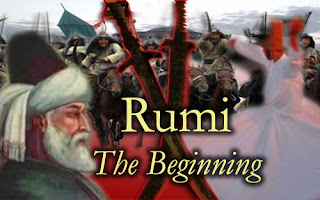 This is a revised online version of The Republic of Rumi: a Novel of Reality (2007). Feedback from audience is welcome, and may be incorporated as it comes, since it's about making informed contributions towards a better world, together.

It so happened one day that the Sultan of Turkey came to Jalaluddin Rumi and said, “I banish myself in penance for sins committed against humanity by the kings. I leave the country to you.” Another Sufi may have declined, but Rumi was one in his own league. Spirit and matter had been separate for centuries but now the two became one.

One of the first things he did was a whirlwind tour of the country for imparting to the masses an understanding of religion. With the help of parables, poetry, flute and some whirling dance he soon raised the plebeians to such levels of spiritual elevation where they could all give opinion on everything.

The clergy became very upset and demanded that since it had always represented religion it was now its right to rule. Rumi announced a date on which the entire adult population of the country was to choose between him and the clergy. He won with overwhelming majority, and his detractors had no option but to leave. Their parting words were, “Democracy is against Islam.”

By now you may have noticed that this is a fictitious account, though not without purpose (a parable is seldom without purpose). A parable was thought to be the best way of introducing this book, since it is never asked about a parable whether it is "true" or not – the truth is rather perceived to be more than appearance.

Hence this first chapter, this 'Parable', is meant to take you straight to the heart of such matters as what the message of Rumi can do for us today, how it is relevant and what we need in order to get started. This first chapter, although divided into several sections by numbers, is just one story: it is quite usual for a parable to be broken down, often with subheadings, and to be interspersed with tales within tales, commentaries, and so on.

For instance, the present parable may digress at this point to inform you that Mawlana Jalaluddin Rumi was born in 1207 in Balkh and died in 1273 in Konya (two cities of the ancient Persian Empire, now in Afghanistan and Turkey respectively), and that he wrote in Persian. Yet, not only his message sounds relevant today but there even appears to be uncanny similarity between his times and our own, which you may notice as you read on.

Those were, of course, the best of the times and also the worst. Crusades had long ended but the mind of Europe was unwilling to bury the dispute. In the Muslim world itself, barbarians were playing havoc—they had started with Afghanistan and did not seem to be stopping even after capturing the last caliph of Baghdad and beating him to death. Farther East, Hindus and Muslims were engaged in an armed rivalry since more than sixty years before.

Bringing peace to such a world was difficult but Rumi was able to send barbarians back to their homes, appease the agitated mind of Europe, settle the longstanding dispute over the Holy Land and create trust between Hindus and Muslims. Details are lost but it has been reported that his peace conferences used to open with a pantomime show of his famous ‘grape story’: four men who cannot understand each other’s languages are fighting over the choice of fruit they should buy with the coin that they found together; an interpreter arrives on the scene, takes the coin and puts grapes in front of the fighting men who then realize that they were, in fact, all pursuing the same choice but naming it differently.

Slavery was intolerable to Rumi. He issued a universal invitation to scientists and urged them to find alternate source of energy for doing away with the need for slaves. He suggested that replacing the Greek model of research with inductive methods could be helpful, since the boundary of the universe was in its centre.

In good time, a scientist came from the north of an island beyond mainland Europe and demonstrated a device that could harness the power of steam for performing several tasks. Rumi appealed to everyone to use this device and free the slaves. The age-old institution of slavery vanished in no time.

For a while, everyone was happy. People from around the world thronged to the court of Rumi and listened to words of wisdom. Hindus, Jews, Buddhists, Zoroastrians, Christians and agnostics came for spiritual guidance and returned with a better understanding of the Path according to their own diverse beliefs.

There was no further trouble until reports started coming that the steam-device was creating problems. Trees were being chopped mercilessly for fuel, skies in some cities had blackened with smoke, and some people were building large monopolies for throwing smalltime competitors out of job. Age-old evils had reappeared in new forms, more powerful than before.

Rumi addressed the whole world and explained that in gratitude to God who gave them the power to harness the forces of Nature, they should voluntarily master their greed. Not all the wealth in the world could be sufficient for a heart unless it learns to be content by itself. Yes, you have the freedom to produce as much as your creative faculties desire but will you also find the time to create something in the depths of your soul?

“Whoever devours grass ends up under the butcher’s knife,” said Rumi. “Whoever feeds on the light of God becomes the Word of God.”

Unfortunately, it never happened in history. Can it happen now, and how? Watch out for the next installments, and see if you can make it happen.