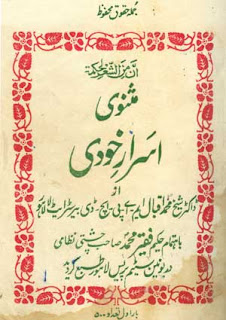 The first enclave in the Garden of Poetry is Secrets and Mysteries. It consists of two parts, ‘The Secrets of the Self’ and ‘The Mysteries of Selflessness’. The first appeared in 1915 and was thoroughly revised after feedback from public three years later, around the same time when the second part was opened to visitors. Around 1922, both parts were combined to form the standard edition which you are now visiting.
Instantly, you are greeted by Mawlana Jalaluddin Rumi, rather like a dean welcoming someone from a fresh batch of students. The welcome note of the Mawlana is short, consisting of only six lines from his Divan:

Yesterday the Shaykh wandered about the city with a lamp:
“I am weary of demon and monster: I seek a human being.
I am sick of feeble-spirited companions,
I seek the Lion of God or Rustam of the legends.”
I said, “What we have sought is never attained.”
He said, “I seek that which is unattainable.”

Rustam was a legendary hero of ancient and “the Lion of God” refers to Ali, the cousin and deputy of Prophet Muhammad (peace be upon him). He was also the fourth caliph and most schools of Sufism trace their spiritual lineage to him. Here at the very beginning, you find two of the clues of Joseph combined in the person of Ali: Sufism and kingdom. “What I have sought is never attained” is reminiscent of the third clue, Time. Indeed, the master speaks in parables, and the apparent calm and simplicity which covers this intriguing riddle is awe-inspiring. You have received a heavy blessing.

As you enter the Prelude, you are greeted by another Persian poet. He is Naziri of Nishapur (incidentally from the same city as Attar, the predecessor revered by Rumi so much). His greeting is brief:

Nothing in my forest has gone waste:
Wood that could not be used in the pulpit has been made into gallows.

The gallows almost always refer to Mansur Hallaj, a ninth century Sufi who was executed for revealing a secret that could never have been uttered from the pulpit. “Ana al Haque,” he said. In Arabic, it could mean, diversely, “I’m the Creative Truth,” “The self is God” or “I’m God.” What Naziri has said about his metaphorical forest may also be true about the , if its architect is willing to be bold enough to reveal secrets like Hallaj.
It is daybreak as you enter the first part of the enclave. The Poet’s tears have beautified Nature and he is going to be your guide. His dust appears to be brighter than Jamshid’s Cup, the magical device in which the mythical king of could see anything that existed in the world. The Poet has plucked flowers that were unborn in the sap of the tree and now they form parts of the Garden. In front of your eyes leaps a deer that has not yet sprung out from non-existence and it is also part of the Garden.


You are offered a special drink that has a strong base of water from Zamzam, the pure fountain in Makkah. The drink has the effect of washing away the vexation of Time from the hearts and illuminating the thought. It brings you a flashback in which you see the Poet as an unfinished statue. Rumi appears, chisels him with love and commands, “O frenzied lover! Take a draught of love's pure wine. How long will you be silent like a bud? Sell your fragrance cheap, like a rose! Like the reed, bring a message from the reed bed: bring a message to Majnun from the tribe of Layla. Create a new style for the song and enrich the assembly with your piercing strains. Inspire every living soul and give them new life. O bell of the caravan, awake!”
The statue that had been chiseled into the Poet now becomes a giant wave of the boundless and mysterious ocean which is Rumi. The wave lodges itself in the heart of the ocean and becomes a pearl. Now you see the vision from such great distance that the ocean appears tiny like a flower, and it is not the only flower in view. You can see the entire garden, which is the Muslim nation. Its countless flowers represent the great visionaries that sprung from it.
“I have no need of the ear of today,” the Poet is saying to you. “I am the voice of the poet of tomorrow. My own age does not know the secrets. My Joseph is not for this market. No one has told the secret which I will tell. Come, if you would like to know the secret of everlasting life. Come, if thou would like to win both earth and heaven. I unveiled the secret of the self and disclosed the mystery of its miraculous power. Poetizing is not the aim of this work, so do not find fault with the wine‑cup but consider attentively the taste of the wine.”
The ‘Prelude’ has comprised of five stanzas, each with a different theme, but the bottom line is that all previous knowledge must be held in abeyance while you are in the Garden. If the Poet’s contemporaries did not possess the means for discovering Joseph, then previous knowledge about Rumi, philosophy or anything of the real world cannot be applied here. Those tools were available to those contemporaries who, according to the Poet, did not have the means for discovering Joseph.


This leaves only one option. You should proceed without preconceived notions of any sort and see where the five clues take you in your search for Joseph in the Garden.

This is the sixth chapter in the revised online version of The Republic of Rumi: a Novel of Reality (2007). Next chapter: The System of the Universe.