7. The System of the Universe 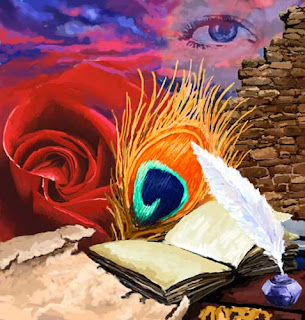 This is the seventh chapter in the revised online version of The Republic of Rumi: a Novel of Reality

Keeping the prelude in mind, you enter the first chapter:

The inscription is the title of the first chapter. “The form of existence is an effect of the self,” says the Poet as you enter. “Whatever you see is a secret of the self. Self-affirmation brings not-self to light.” The seed of opposition is sown by the self too. It imagines itself to be other. As such, contradictions do not exist. There will appear to be contradictions, only to be resolves so that you may arrive at the Unity behind them.
Here is the basic rule about the Garden, then. Things will appear to contradict each other, but your job is to see beyond. When the Poet said that he had something to say which no one had told before, he seemed to be contradicting all past masters. It turned out that Rumi himself had assigned him the task.
The urge to resolve contradictions comes from the formation of ideals, because they give you a sense of purpose. That is the theme of the next chapter, as you may tell from the inscription:

Bringing an ideal to birth is different from pursuing a whim or desire. Only that can be “born” which has been conceived according to the principles of life. An ideal is not a mere proposition of the mind. It has to be formed in the depth of the self and it comes into being as the process of its formation is completed. Ideas formed in the mind can lead to hairsplitting, through which one can become further embroiled into contradictions of appearance. Ideals formed in the self bring a sense of purpose and lead to resolution of contradictions.
“Rise, O you who are a stranger to Life’s mystery,” says the Poet. “Rise intoxicated with the wine of an ideal: an ideal shining as the dawn, a blazing fire to all that is other than God; an ideal higher than Heaven – winning, captivating, enchanting everybody’s hearts, a destroyer of ancient falsehood, fraught with turmoil, and embodiment of the Last Day.” You already have such an ideal. It is Joseph. The Poet seems to be aware of that. “We live by forming ideals,” he says. “We glow with the sunbeams of desire!”
Posted by Khurram Ali Shafique at Sunday, February 07, 2010