This is Chapter 38 from the revised online version of The Republic of Rumi: a Novel of Reality. 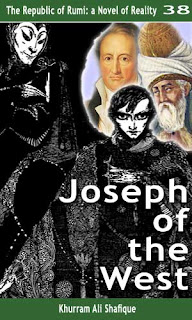 Poets, thinkers and leaders of the West appear from an Eastern point of view in the gallery called the Western Images – John Locke, Immanuel Kant, Friedrich Hegel, Karl Marx, Schopenhauer, Friedrich Nietzsche, Leo Tolstoy, Petofi, Henri Bergson, Albert Einstein, Kaiser Wilhelm, Vladimir Lenin and many more.
Past and present merge, and so do East and West. Western philosophers hold conversations with ancient Persians like the anarchist Mazdak and the stonecutter Farhad. Rumi debunks the philosophy of Hegel and the manipulative positivism of the French philosopher August Comte is shred to pieces by the plain common sense of an unschooled worker. In yet another corner, the poets Robert Browning and Lord Byron from England are exchanging autobiographical reflections with Mirza Ghalib of India and Rumi. Perhaps the most remarkable is a meeting between Goethe and Rumi in a corner of Paradise.

The playwright and the director come to a compromise at presenting something that is entertaining as well as thoughtful: Faust, a tragedy in two parts. It opens in Heaven where the Devil, as Mephistopheles, lays wager with God that the pious Doctor Faust shall end up in hell.
Faust agrees to give his soul to Mephistopheles in exchange for a moment so fair that Faust should wish it to last.

This is difficult because Faust is insatiable. He ends up seducing his beloved Margaret a.k.a. Gretchen and ruining her life (although her soul is also saved by Divine Grace). He summons the spirit of Helen of Troy, provides advice to monarchs and goes on to launch voyages of discovery which unfortunately turn into colonialism – “then commerce, war and piracy are three in one and cannot be parted.”

Undeterred, Faust plans to reconstruct the world as a veritable paradise that shall have no traces of violence that is one of the undesirable remnants of the ancient world. Mephistopheles gets his chance of claiming the soul of Faust when the hero, while visualizing the perfect world of his own creation in the future, declares that such will be the moment to which he might say, “Abide, you are so fair!”

Mephistopheles still loses the wager because Faust only declared his intention of wanting a moment to last but such a moment did not arrive actually.

Rumi offers feedback to Goethe on his masterpiece. “Your thought has made its home in the inner recesses of the heart and created this old world anew," says Rumi to the German poet-thinker. "He who is blessed and is a confidant, knows that cunning comes from the Devil and love from the human being.”
Is it because of Joseph of the West that such a world has become possible where East should meet West in this manner?
Posted by Khurram Ali Shafique at Monday, June 28, 2010