35. The Spirit of Muslim Culture

This is Chapter 35 from the revised online version of The Republic of Rumi: a Novel of Reality 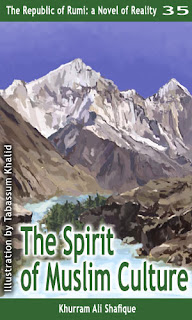 Some images in the Hall of Reflections are labeled with the names of Western poets especially Goethe. They are reflections on their works and one of them shows you why Goethe has been chosen as the guide for your induction into the present stage of your journey. The German poet turns out to be an admirer of Prophet Muhammad.
Near a signpost saying ‘The Stream’, you witness the journey of a beautiful stream. The Poet is standing nearby to inform you, “‘The Stream’ is a free rendering of Goethe’s celebrated poem ‘Muhammad’s Song’ (‘Mohamet’s Gesang’), which was composed long before West-Eastern Divan. The German poet has exquisitely brought forth the Islamic concept of life. In fact, it formed part of the planned drama on Islam which he could not complete. The translation is meant only to show Goethe’s point of view.”
‘The Stream’ has four stanzas and it is not impossible for you to discern parallels between these and the first four aspects of Time as depicted in ‘The Song of Time’. The fifth aspect of Time, i.e. Time as reward, did not require to be depicted separately since it is the overall picture that emerges from the poem.
Stanza 1

The stream is sound asleep in the cradle of the clouds until it opens its eye in the lap of the mountains. Linked with itself, unlinked with all, it merrily flows through the meadow, its graceful motion striking music from the pebbles. It is headed towards the boundless ocean.

Spring has fashioned a fairyland along the track of the stream. Roses attempt to tempt it while the rose-bud laughs coquettishly but unmindful of these green-robed beauties the stream cleaves the desert and rends the breast of hills and valleys in its onward march towards the boundless ocean.

Stricken with drought, a hundred feeble brooks from woods, meadows, valleys and gardens and villas cry for help. The stream, having evaded all charms of the earth-rooted flowers, opens its breast to the winds of the East and the West. It clasps its weak and wailing fellow-travelers. With a hundred thousand matchless pearls it flows on towards the boundless ocean.

The stream is now a surging river surpassing dam dykes, narrow gorges of valleys, hills and glen. Made one like a torrent passionate, fierce, sharp, restless and heart-inflaming, it arrives each time at the new and goes beyond the old. Linked with itself, unlinked with all, it merrily flows towards the boundless ocean.

So Goethe was the pioneer of poetry praising Prophet Muhammad in modern Europe. This was the kind of man who could provide a reliable and lasting bridge between East and West but the spirit of his message, unfortunately, is now being ignored even in the West.
Posted by Khurram Ali Shafique at Saturday, June 19, 2010