The Awakening of India 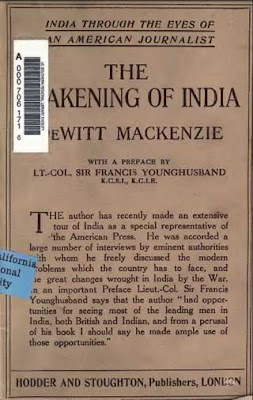 The following assessment of Iqbal was written by Sirdar Jogendra Singh, a prominent literary personality of the sub-continent, and was published in the concluding pages of The Awakening of India (1917) by DeWitt Mackenzie.
A great poet has arisen in the Punjab whose poems are consecrated to the ideas of new time. Iqbal has initiated a new era in Urdu poetry. He combines the imaginative philosophy of the East with ardent aspirations of the West. Like Moses he smote the rock, and fresh streams of poetry have leapt out in response, on whose swift and translucent surface we can hardly breathe. He does not sing of self-effacement, but holds forth self-affirmation as essential to self-preservation.
The life value of self-affirmation he illustrates in a poem of great dignity and grace, 'A thirsty bird mistake a diamond for a drop of water, but it cannot make it a source of life to itself. It sips the soft morning dew from the painted petals of flowers which lose their own brief existence in the yielding. The coal in essence is the same as a diamond, and yet coal feeds the flaming furnace while the diamond adorns the crown.’ In a poem of keen, strong, rousing power he draws the moral that self-affirmation is the key to self-preservation.
Iqbal in this poem has broken away entirely from the canons of accepted opinion. He is the precursor of great events in the domain of literature. He is the poet of reality, close to the very truth of things, in contradistinction to metaphysics and mere sentiment.
His force, anger, even his gloom and freedom from mystic reticence, make him a spirit of power. His ambition is to set the heart burning like a candle, to be consumed and yet in the very process of burning to illuminate the path for the unseeing eye.
He plunges into the whirlpool of thoughts, hopes and passions, joys and sorrows, and brings forth into life, with unshackled freedom, truth, and favour, ideas, so silent so long, of religious, social and political well-bring. Iqbal, Tagore, and others are precursors of a new movement. What India will make of it? What will the new movement make of the new literature? It is not for me to prophesy. The words of Iqbal ring clear:
‘The world will witness when from my heart
springs the storm of expression;
My silence conceals
the seed of aspiration.'
Posted by Khurram Ali Shafique at Sunday, May 15, 2011