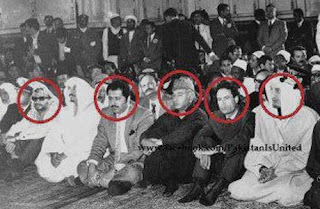 Which of the 5 leaders highlighted in the photograph made the following statement?

“Instead of falling prey to their false propaganda of peace, the colored races of the  world should unite against the [Western] people whose eyes have lost the light of humanity due to the darkness of their hearts. Now they have created two camps for their survival [i.e. the capitalist and the socialist]; but both pursue the common goal of exploiting the colored races. The two camps appear to be having conflicting ideologies and they seem to be at each others’ throats, but this is a mere illusion. Talk about universal brotherhood goes on, but at the same time, the Red Indians are denied equal rights. The third camp which I am envisioning will comprise of the colored races alone.”

The picture shows the founders of OIC in Badshahi Mosque, Lahore, during the second Islamic Summit Conference held in 1974. Identified by red circles, they are (from left to right): Yasser Arafat, Anwar Sadat, Zulfikar Ali Bhutto, Gaddafi and King Faisal of Saudi Arabia.

The picture is circulating on the Internet these days with a suggestion that all these leaders got assassinated by the USA. It was emailed to me by a friend who wanted my opinion.
The answer will be posted at this blog on Tuesday,  November 1. Don't forget to come back and check!
Posted by Khurram Ali Shafique at Saturday, October 29, 2011