Growing up in Pakistan in the 1970s, I first heard the name of Gaddafi (called "Qazzafi" in Pakistan) with reference to his impassioned speech at the Islamic Summit Conference held in 1974 in Lahore. It was said that he stole the show with his blunt speech in favor of Pakistan's nuclear programme.

He became a personal friend of our prime minister Zulfikar Ali Bhutto, who renamed the National Stadium Lahore as "Gaddafi Stadium". Wikipedia describes it as "the largest field cricket stadium in world with the capacity of 60,000 spectators". Ironically now, even if he gets buried in an unmarked grave as announced by the new regime in Libya, Gaddafi may still leave his name on the largest field cricket stadium of the world.

The warmth between "Colonel Qazzafi" and an average Pakistani was probably lost after the execution of Bhutto in 1979. Information about the Libyan leader's involvement in international terrorism and his high-handedness at home, which had apparently been toned down by the media during the Bhutto regime, was now allowed to become more widespread in Pakistan.

Things changed again in 1988 when the Bhutto family returned to power. Benazir's stints as Prime Minister were short (from 1988 to 1990, and from 1993 to 1996), but the kind of intelligentsia which came to rise with her stayed in place for a long time. Some of them were intellectuals who would denounce General Zia as oppressive dictator from one corner of their mouths and hail Colonel "Qazzafi" as liberator of the oppressed and a true friend of the people from the other.

It was usually said that the younger lot in the Bhutto family, such as Benazir and her siblings, affectionately called him "Uncle Qazzafi". 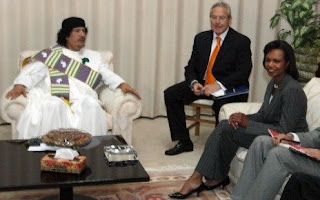 However, Gaddafi's stardom was over at least for the people of Pakistan. He faded out of the headlines once again in the 1990s; and made a comeback only in the 21st Century as the new ally of the West - the reformed warlord who was now eager to play his role in world peace, of course, with assistance from the US Secretary of State Condoleezza Rice.
The rest, we may say, is not history but current affairs (no pun intended with any reference to the previous sentence). So, no need to go over it here, since this post has been written mainly for the benefit of the younger generation, many of whom may not have known this subjective side of the Pakistani part of the story.

One lesson to be learnt from all the information which is coming our way with regards to the events in Africa and the Middle East is that at least we should give due credit to our history. Since 1947, we have had our share of military rulers and civilian dictators, and some of them may have aspired to stay in power for forty years, or to set up dynastic rule. However, hats off to the people of Pakistan, such a thing has never actually happened here. Let's remember this, so that it doesn't happen here even in the future.

Above: Speech (in English) by Zulfikar Ali Bhutto
in honour of Gaddafi and the Libyan delegation
at PM Guest House, Pakistan, on
February 26, 1974;
Below: Gaddafi's speech (in Arabic) in Pakistan,
February 22 (in 3 parts)