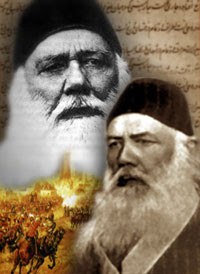 The influence of Syed Ahmad Khan remained on the whole confined to India. It is probable, however, that he was the first modern Muslim to catch a glimpse of the positive character of the age which was coming. The remedy for the ills of Islam proposed by him, as by Mufti Alam Jan in Russia, was modern eduction. But the real greatness of the man consists in the fact that he was the first Indian Muslim who felt the need of a fresh orientation of Islam and worked for it. We may differ from his religious views, but there can be no denying the fact that his sensitive soul was the first to react to the modern age. The extreme conservatism of Indian Muslims which had lost its hold on the realities of life failed to see the real meaning of the religious attitude of Syed Ahmad Khan.

(Excerpt from 'Islam and Ahmadism', an article by Iqbal published in January 1936; included in Writings, Speeches and Statements of Iqbal compiled by Latif Ahmad Sherwani and published by Iqbal Academy Pakistan)