"What is this ocean whose shore is knowledge? What is that pearl which is found in its depth?"

This is the second of the nine questions in 'The New Garden of Mystery', a part of Persian Psalms (1927) by Allama Iqbal. The answer which we may gather from the writings of Iqbal is basically something like this: Life is the ocean and the pearl to be found in its depth is selfhood (خودی). Knowledge is just the shore. 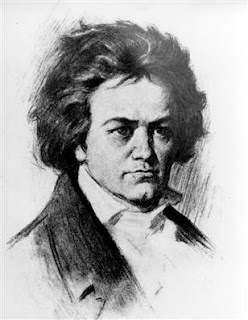 The state of mind in which Beethoven composed his second symphony was perhaps painfully conducive for such kind of introspection. The symphony was performed for the first time in 1803 and had been composed shortly before that at the time when Beethoven had first become aware of his impending deafness. Around that time he wrote in a famous letter: "I would have ended my life. Only my art held me back. It seemed to me impossible to leave the world until I had produced all that I felt was within me." (See 'Notes on Beethoven's Second Symphony' by Christopher H. Gibbs).

The symphony itself was described by one of its earliest critics, quite famously, as ""a hideously writhing, wounded dragon that refuses to die, but writhing in its last agonies and, in the fourth movement, bleeding to death." (See Wikipedia). Later, the French Romantic composer Hector Berlioz described it as a symphony that was "smiling throughout." His commentary on the symphony is sometimes regarded as definitive:

In this Symphony everything is noble, energetic, proud. The Introduction [Adagio molto] is a masterpiece. The most beautiful effects follow one another without confusion and always in an unexpected manner. The song is of a touching solemnity, and it at once commands respect and puts the hearer in an emotional mood. The rhythm is already bolder, the instrumentation is richer, more sonorous, more varied. An Allegro con brio of enchanting dash is joined to this admirable introduction. The fast motive which begins the theme, given at first to the violas and cellos in unison, is taken up again in an isolated form, to establish either progressions in a crescendo or imitative passages between wind instruments and the strings. All these forms have a new and animated physiognomy. (See Christopher H. Gibbs)