In 1317 AD, a travelling Sufi posed seventeen questions to the masters in Tabriz, the city where Rumi's mentor Shams was supposed to have wandered around almost a century earlier. The questions were answered by a leading Sufi poet of the times, Mahmood Shabistri, in the 9000-line long poem which became a classic and a definitive text on Sufi doctrines: Gulshan-i-Raz, or The Garden of Mystery.

Allama Iqbal believed that this work went a long way into helping the Muslim world revive from the destruction it had faced at the hands of Mongol invaders not long before the publication. He compared the situation of the Muslim world in his own times to be not very different: European colonialism had once again played havoc. So, 610 years after Shabistri, Iqbal published 'Gulshan-i-Raz Jadeed', or The New Garden of Mysteries (or, as some may prefer to call it today: Garden of Mysteries Reloaded). It formed a part of Iqbal's fourth book of poetry, Zuboor-i-Ajam (1927), or Persian Psalms.

Iqbal's version clusters some of the original questions together while omitting some. The result is a compact set of nine questions with succinct answers, usually less than three pages each. I understand that Iqbal intended these to serve as a summary of his thought. Perhaps he also gave these as a key to unlock some of the "secrets and mysteries" which he claimed to be hidden in his work. In any case what he stated openly in that book was that these nine questions and his answers were meant to be the guiding light for wisdom in modern times.

There is something very interesting about these questions which I have found in the course of my investigations. I have found that this set of nine becomes interestingly compatible with some other sets of nine: such as the nine books of Iqbal's poetry, the nine symphonies of Beethoven and so on. 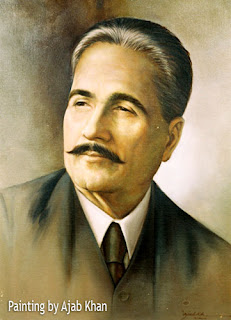 Iqbal wrote nine books of poetry and died while writing the last of those. In my online course Introduction to Iqbal Studies, I ask the participants to see if each of these books seems relevant for answering the corresponding question. The feedback given by the participants is mostly in the affirmative.

I do not mean to mystify the reader. In my opinion this has got less to do with supernatural and more to do with the possibility that in rearranging his questions, Iqbal could have arrived upon some natural order of the cognitive process of the human mind. In other words, he may have succeeded in representing some kind of a genetic code of the human thinking process through his nine questions.


It is often presumed that Iqbal did not present his philosophy in a systematic manner. I also used to believe it once but then I realized that this could be true only up to the extent that the "system" of Iqbal's thought was presented in a manner not similar to many Western thinkers. Othewrise, there have always been those who believed that Iqbal had a well-developed system of thought - his constant companion of the last days Syed Nazeer Niazi and the first director of Iqbal Academy Pakistan Dr. Muhammad Rafiuddin, to name just two. I am now of the opinion that the nine questions and answers comprising 'The New Garden of Mystery' (گلشنِ راز جدید) in Persian Psalms (زبورِ عجم) can be treated as a succint description of Iqbal's philosophy.

A simpler answer could be that thinking is one of the functions through which the ego strives for perfection. Since the life of an ego is defined by ideals (and the collective ideals tend to be greater than an individual’s), thinking is helpful when it leads us to discovering and creating greater ideals and becomes an impediment when it prevents us from pursuing ideals, as Iqbal says in Urdu:
سمجھتا ہے تُو راز ہے زندگی
فقط ذوقِ پرواز ہے زندگی

Answer. The universe may be constantly expanding and therefore boundless. It still has boundary, which lies within because at the centre of the universe is the Reality which never changes. Therefore, anyone who gets connected with the Ultimate Reality, i.e. God, can also grasp the entire universe including parts that are yet to be born – as Iqbal says in his Urdu verses:
خودی سے اِس طلسمِ رنگ و بُو کو توڑ سکتے ہیں
یہی توحید تھی جس کو نہ تُو سمجھا نہ میں سمجھا
نِگہ پیدا کر اے غافل تجلی عینِ فطرت ہے
کہ اپنی موج سے بیگانہ رہ سکتا نہیں دریا
Read translation of complete answer in English

Answer. “I” identifies an ego: you are an ego if you can say “I”. These egos are like sparks shedding from a great fire, which is Life. You travel into yourself by conquering the material and spiritual dimensions of the worlds, and when you return from a meeting with God in such a manner that you have Him in your heart and are holding His world in your hands, as Iqbal says in Urdu:
خودی کا نشیمن ترے دل میں ہے
فلک جس طرح آنکھ کے تِل میں ہے
بڑھے جا یہ کوہِ گراں توڑ کر
طلسمِ زمان و مکاں توڑ کر
خودی شیرِ مولا جہاں اس کا صید
زمیں اس کی صید، آسماں اس کا صید

Answer. Ego is a part of the apparent world but is also greater than it. We reach it through the inner dimension of Life. In more practical terms, we reach the ego by submitting our individual self before the collective ego, as Iqbal says in his Urdu verses:
خودی کیا ہے؟ رازِ درون حیات
خودی کیا ہے؟ بیداریء کائنات
ازل اس کے پیچھے، ابد سامنے
نہ حد اس کے پیچھے نہ حد سامنے

Answer. Our journey is from ourselves to ourselves: there is no end to it because our goal is to see the signs of God, and the eyes cannot get tired of visions – there will always be more for us to seek and behold. Therefore, the “perfected one” (کامل) is a person who has witnessed the signs of God and is therefore aware of the destiny of nations (the same concept was presented in the Allahabad Address as, “By leaders I mean men who, by Divine gift or experience, possess a keen perception of the spirit and destiny of Islam, along with an equally keen perception of the trend of modern history.”), as he also stated in his Urdu verses:
زندہ دل سے نہیں پوشیدہ ضمیرِ تقدیر
خواب میں دیکھتا ہے عالم نَو کی تصویر
اور جب بانگِ اذاں کرتی ہے بیدار اُسے
کرتا ہے خواب میں دیکھی ہوئی دنیا تعمیر
بدن اس تازہ جہاں کا ہے اُسی کی کفِ خاک
رُوح اس تازہ جہاں کی ہے اُسی کی تقدیر

Answer. For centuries, Eastern heart and intellect were getting trained to perceive the world as illusion. What Hallaj said was just the kind of thing needed for awakening such a society. Iqbal elaborated this point further in his next book Javid Nama, where the spirit of Hallaj was presented as saying, “I saw a people who were turning away from life, so I decided to wake them up. They said they believed in God and yet they didn’t believe in themselves. How can you have faith in the Almighty without having faith in yourself?” It would be interesting to note that Iqbal saw his own mission as somewhat similar to that of Hallaj, as he says in his Urdu verses:
فردوس میں رومی سے یہ کہتا تھا سَنائی
مشرق میں ابھی تک ہے وہی کاسہ، وہی آش
حلاج سے لیکن یہ روایت ہے کہ آخر
اِک مردِ قلندر نے کیا رازِ خودی فاش

Further reading: see my book The Republic of Rumi: A Novel of Reality (2007) for a demonstration of how the "Nine Questions" contribute to the internal coherence in the poetical works of Iqbal. An updated online version is also available for free.