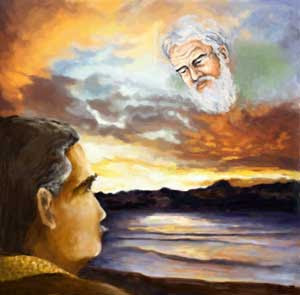 The following note appeared in a Sufi magazine published in Urdu from Meeruth, a city in India, on August 1, 1913:

Dr. Sheikh Muhammad Iqbal dreamed that Rumi was commanding him to write a masnavi (a long poem of rhymed couplets). Iqbal replied, “That genre reached its perfection with you.” Rumi said, “No, you should also write.” Iqbal stated respectfully, “You command that the self must be extinguished but I reckon the self to be something that should be sustained.” Rumi replied, “My intended meaning is also the same as what you have understood.”

He [Iqbal] found himself reciting the following verses as he woke up, and then he began to write them down…

This was Asrar-o-Rumooz (Secrets and Mysteries), the first book of Iqbal’s poetry, published in two installments in 1915 and 1918. Although Iqbal was an outstanding poet of Urdu for almost thirteen years by then, he had not written more than half a dozen poems in Persian, yet it was the language of Rumi, and the verses which flowed from Iqbal's pen when he woke up from the dream were in the same language, meter and style as Rumi's Masnavi.

Rumi as presented in 'A Parable Never Told' is how he appears in imagination after we have read Iqbal. In the works of Iqbal, we find the master from Konya in lively discourses with Goethe, Byron and Browning as well as giving expert opinions on Hegel and Nietzsche. Yet also, on occasions, we find him to be a catalyst for resurrection:

While the concepts behind this worldview are explained in prose works written in English (The Reconstruction of Religious Thought in Islam published in 1930/34 and the Allahabad Address published in 1930), changes in the form of poetry itself, always occurring through Rumi, suggest an equivalent transformation of the real world. For that, the key seems to be Joseph, a figure who keeps appearing and reappearing as mysteriously as Rumi himself: “You should not tell the secrets of lions to jackals, for even if the wolves take away our Joseph it is better than his getting sold to the unworthy,” says Rumi to Iqbal in the prelude of the eighth book. He has just commanded his disciple to reveal the secrets of politics and government. Therefore, the question is: Who is Joseph?

This is the third chapter in the revised online version of The Republic of Rumi: a Novel of Reality (2007). Next chapter: Joseph.