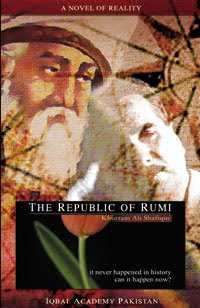 Rules must be observed if Joseph is to be found. “My own age does not know the secrets,” Iqbal warned his earliest listeners. “My Joseph is not for this market.” If his contemporaries did not possess the means for discovering Joseph then obviously anyone looking for the secret must approach these texts without preconceived notions. No previous knowledge about Rumi, philosophy or anything of the real world should be applied because those tools were available to Iqbal’s contemporaries who, according to him, did not have the means for discovering Joseph.

Collecting all references to themes associated with Joseph (Sufism, kings and Time) from the works of Iqbal cannot help either, because that would provide information but not the holistic experience that is the essence of poetry, the medium used by Iqbal.

That leaves one option. It is to “enter” the world of Iqbal’s writings as if it were a virtual reality. Leaving all prior knowledge outside, you should look for clues as they appear in their “three-dimensional” context and see where it leads.

The rest of the present book is your journey through this virtual reality. It is being called “the Garden of Poetry” here, because Iqbal himself referred to his work as “baagh-i-sukhan” which means the same in Persian. Each poetical work has been converted into an enclave, and hence there you are going to pass through nine enclaves. His prose work, the Reconstruction, consisting of seven lectures, has been converted into a “university” at the far end. His political speech, the Allahabad Address, will be given to you as souvenir on the exit. For your convenience, the contents of all these works have been listed as Appendix, which you can consult at any time if you feel lost.

Your search for Joseph in the Garden of Poetry will be, in fact, a walk through the works of Iqbal. Place names in the Garden of Poetry have been derived from these contents. For instance, Persian Psalms has been presented as “the Temple of New David,” since the working title of that book, while Iqbal was writing it, was The Song of a Modern David. The famous poem ‘The Mosque of Cordoba’ will appear as a grand mosque instead, but it will be constructed of stanzas instead of bricks. Needless to say, locations and descriptions of all structures have been kept strictly according to their occurrence in the original text.

Ideas which a reader gets while reading these works are going to be presented here as “experiences”. For instance, when you are told in the very next chapter that you enter the Garden at daybreak, it simply means that the first book of Iqbal’s poetry opens with some such lines as, “When the world‑illuming sun rushed upon night like a brigand…” Likewise, you may find the Poet turning to you and saying, “Come, if you wish to know the secret of everlasting life…” This would mean that at this point in the poem, the Poet addresses the reader directly (Navigating through this kind of virtual reality has become easier in the age of computers and the Internet. We “visit” websites, “exit” windows and so on. Hence it may not baffle you to “enter a chapter” or “exit” a book, which are the sort of things you shall be doing in the remaining chapters).

There are 111 chapters in the book, and you are now on the fifth. Beyond this chapter is the Garden of Poetry. The clues that will lead you to the secret are:

Remember these, and forget everything else. Enter the Garden with a clear mind, since no previous knowledge is allowed inside, or else Joseph may never be found.

This is the fifth chapter in the revised online version of The Republic of Rumi: a Novel of Reality (2007). Next chapter: The Poet.