This is Chapter 36 from the revised online version of The Republic of Rumi: a Novel of Reality. 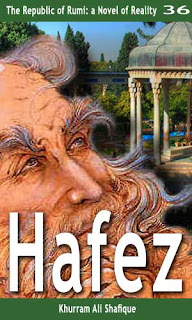 British, French, Italian and Greek forces enter Constantinople. The Caliph, who is supposed to be the emblem of Muslim unity, hands over his power to the conquerors. Thus ends the Ottoman rule that had triggered the European Renaissance by sacking Constantinople almost five hundred years ago now comes to end. Having painted the Middle East red with the treachery of the Arab chieftains, the Allied armies now begin genocide of Turks in their own homeland. “Charmed by the pen, the human being seems to have put down the sword,” says the Poet. “Having built an idol-temple of world peace this slave of lust danced around it to the music of the pipes but when war tore off the veil, he stood exposed as blood-thirsty and quarrelsome.”

Mustafa Kemal Pasha, a veteran of the World War, appears from among the masses in Turkey and defeats the invaders. After regaining Constantinople, he refuses to give it back to the king. He gives it to the people. Declaring that the days of imperialism are finally over, he relinquishes all claims of his nation on lands that do not belong to it. He is the new type of leader in whom Life itself is struggling restless to solve its own problems.

Beyond this realm of ideas lies a tavern for restoring some madness to your method. The sign board on the entrance reads ‘Remaining Wine’ – a suitable name for such a place.
The Remaining Wine

The nomadic conqueror from Central Asia, Tamerlane, is flashing like lightning across empires, razing cities to rubble and erecting towers of severed skulls. Sitting beside clear blue ponds amid lush green meadows, the Persian poet Hafez of Shiraz is putting the sweet unconscious spirituality of the nightingale in words like cut jewels. His poetry is like narcotics that may sooth the nerves after prolonged periods of sustained activity and whether it further weakened the Persian will against the invasion of Tamerlane at that time is now beside the point. With the emergence of Mustafa Kemal Pasha more than five hundred year later, the worst days of the East are now left behind and there cannot be much harm in having a little taste of the powerful drug prepared by Hafez.

“Spring has spread out a banquet up to the Garden,” you hear a familiar voice as you enter the tavern. The ghazals served here are distinctly crossed with the brew of Hafez, whose effect on Goethe was to leave him shaken but not stirred. “Do not imagine that our clay was fashioned when the world was made,” you hear after you have taken a few drinks. “We are still a thought in Being’s mind!”
Music is heard, and then a voice: “O singer! Sing verses from the holy guide Rumi so that my soul may be immersed in the fire of Tabriz!” “Our goal is God,” the saying of Rumi comes like a flame.
“Your Beauty shines through the glass like the color of reflection,” the Poet offers a toast to the Almighty. “Just like wine, You too have veiled Yourself with a goblet’s wall!” It starts getting even heavier as he declares, “A true lover does not differentiate between the Kabah and the idol house. One is the Beloved’s privacy and the other His public appearance.” This is no altruism – not the result of a willing suspension of belief but the reward of a penetrating vision: “Learn how to put a rosary bead on the thread of the Brahmin, and if your eyes see double then learn how not to see.”
Then a tankard comes with an unusual label: ‘Addressed to a Sufi’. It goes on to say:

Do not talk any more about Joseph we have lost: the warmth of a Zulaykha’s heart neither you have nor I.

Zulaykha attempted to seduce Joseph and accused him falsely upon getting exposed. Secretly she still kept bragging about her passion in the company of her female friends. The Poet is identifying himself and other Sufis with this woman: the imprisoned Joseph would later interpret a significant dream for the Pharaoh but would refuse to come out until the women were asked to speak the truth. Then Zulaykha would confess even at a great risk to her life.
The Poet and the Sufis will have to stand witness and run some risk when their Joseph comes out. The timing is not right: “the warmth of a Zulaykha’s heart neither you have nor I.”
Posted by Khurram Ali Shafique at Saturday, June 19, 2010