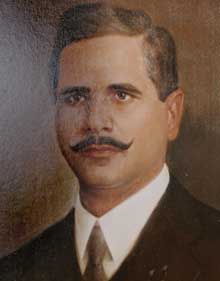 'Political Thought in Islam' was the first paper of Iqbal to be published after the completion of his doctoral thesis. As such it can be treated as the manifesto which provided the basis for all subsequent work of Iqbal was built. It was first published in 1908 in the Sociological Review, London, and reproduced by the Hindustan Review, Allahabad, in its issues for December, 1910 and January, 1911. It was later translated into Urdu as "Khilafat-i-Islamia" and published in the early 1920s. It has been included in various anthologies of Iqbal's prose works, especially The Writings, Speeches and Statements of Iqbal edited by Latif Ahmad Sherwani and The Discourses of Iqbal edited by Shahid Husain Razzaqi. It shall be serialized at this blog in eight instalments. Here is the first.

Pre-Islamic Arabia was divided into various tribes continually at war with one another. Each tribe had its own chief, its own god and its own poet, whose tribal patriotism manifested itself chiefly in the glorification of the virtues of his own tribe. Though these primitive social groups recognised, to a certain extent, their kinship with one another, yet it was mainly the authority of Muhammad and the cosmopolitan character of his teaching, which shattered the aristocratic ideals of individual tribes, and welded the dwellers of tents into one common ever-expanding nationality. For our purpose, however, it is necessary to notice, at the outset, the features of the Arabian system of tribal succession, and the procedure followed by the members of the tribe on the death of their chief.
When the Chief or Shaikh of an Arab tribe died all the elders of the tribe met together, and, sitting in a circle, discussed the matter of succession. Any member of the tribe could hold the chieftainship if he were unanimously elected by the elders and heads of great families. The idea of hereditary monarchy, as von Kremer has pointed out, was quite foreign to the Arab mind, though the principle of seniority, which, since Ahmad I, has received legal recognition in the constitution of modern Turkey, did certainly influence the election. When the tribe was equally divided between two leaders, the rival sections separated from each other until one of the candidates relinquished his claim; otherwise the sword was appealed to. The Chief thus elected could be deposed by the tribe if his conduct necessitated deposition. With the expansion of the Arab conquest, and the consequent enlargement of mental outlook, this primitive custom gradually developed into a Political Theory carefully constructed, as we shall see, by the constitutional lawyers of Islam through reflective criticism on the revelations of political experience.
True to this custom, the Prophet of Arabia left no instructions with regard to the matter of his succession. There is a tradition that the old Amir, son of Tufail, came to the Prophet and said, "If I embrace Islam what would my rank be? Willst thou give me the command after thee?" "It does not belong to me", said the Prophet, "to dispose of the command after me."
To be continued next Friday.
Posted by Khurram Ali Shafique at Friday, December 16, 2011