Iqbal's Message to the West 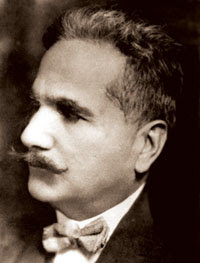 The Message
A Poem from The Message of the East (1923) by Iqbal
O morning breeze, convey this to the Western sage from me:
With wings unfolded, Wisdom is a captive all the more.

It tames the lightning, but Love lets it strike its very heart:
In courage Love excels that clever sorcerer by far.
The eye sees just the colour of the tulip and the rose;
But far more obvious, could we see it, is the flower’s core.
It is not strange that you have the Messiah’s healing touch:
What is strange is your patient is the more sick for your cure.
Though you have gathered knowledge, you have thrown away the heart;
With what a precious treasure you have thought it fit to part!
The courting of philosophy is a vain quest, indeed;
For in its school Love’s lofty regimen is not decreed.
Such are its blandishments, it leads astray the pupil’s heart:
There is no mischief its coquettish glances do not breed.
But its cold fire can never set the seeker’s heart aflame:
It cannot give the heart Love’s sweet pain, though it makes it bleed.
Though it has roamed the deserts, it has captured no gazelle;
Though it has searched the garden, it has not a rose for meed.
The wisest thing that we can do is to appeal to Love;
For our desires’ fulfilment we should always kneel to Love.
Wisdom, since it set foot on life’s labyrinthine way,
Has set the sea on fire and made the whole world go awry.
Its alchemy converted worthless grains of sand to gold;
But oh! it gave the wounded heart no love-balm to apply.
Alas! we were so foolish as to let it steal our wits:
It waylaid us, subjecting us to highway robbery.
It raised up much dust from the civilization of the West
To cast into that civilization’s Holy Saviour’s eye.
O how long can you go on sowing sparks and reaping flames,
And tying up your heart in knots which bear new-fangled names?
The self-absorbed and world-regarding wisdom are two things.
The nightingale and falcon have two different kinds of wings.
It is one thing to pick up stray grain lying on the ground;
Another to peck at gems in the Pleiades’ earrings.
It is one thing to roam the garden like the morning breeze;
Another to delve in the rose’s inmost ponderings.
It is one thing to let doubt and conjecture bog you down;
Another to look up and see celestial happenings.
Blest is the Wisdom which has both the worlds in its domain,
Which calls man’s heart’s fire as well as the angels’ light its own.
We, since we issued forth out of the sacred shrine of Love,
Have burnished mirror-bright the very dust beneath our feet.
O look at our adventurousness in the game of life;
For we have robbed the wealth of both the worlds and boldly staked it.
We watch the day-and-night procession move before our eyes,
With our tents pitched right on the margin of a running streamlet.
Once in our heart, which launched a night-raid on this ancient fane,
There was a fire which we breathed into all things, dry or wet.
We were a flame; we flickered, broke down and became a spark:
And since then we burn fitfully, with yearnings vague and dark.
Love learned the greedy ways of earthly lust and burst all bounds:
It caught men in its toils as fish are caught by fishermen.
Preferring war to peace, it reared up armies everywhere,
Which plunged their swords into the hearts of their own kith and kin.
It gave the name of empire to its acts of banditry;
And heavy sat its yoke on those who lived in its domain.
Now, holding in its hand a goblet full of human blood,
It dances madly to the tune of flute and tambourine.
It is high time that we washed clean the tablet of our heart:
It is high time that with a clean slate we made a fresh start.
The royal crown has passed into the hands of highwaymen.
Hushed is the song of Darius; mute is Alexander’s flute.
Farhad has changed his pickaxe for the sceptre of Parvez.
Gone are the joy of mastership, the toil of servitude.
Freed from his bondage, Joseph sits on Pharaoh’s high throne:
The tales and wiles of Potiphar’s wife cannot win her suit.
Old secrets that were veiled stand unveiled in the market-place:
No longer are they subjects of debate for the elite.
Unveil your eyes and you will see that in full view of you
Life is creating for itself a world completely new.
In this our ancient dust I find the pure gold of the soul:
Each atom of it is a star’s eye with the power to see.
In every grain of sand lodged in the womb of mother earth
I see the promise of a many-branched fruit-laden tree.
I find the mountain as light as a tiny blade of grass,
And heavy as a mountain seems a blade of grass to me.
A revolution too big for the universe’s mind
I see, I know not how: I see it just about to be.
O happy he who sees the horseman, not the dust alone,
Who in the throbbing of the strings sees music’s essence drawn.
Life is, and as long as it lasts, will be a running stream:
This old wine’s youthful effervescense will always be new.
What has been but should not have been will not be any more:
What should have been but has not been will be— it must be so.
Love is all eyes for Beauty’s revelations yet to be:
And Beauty, fond of self-display, must always be on view:
Deep in the earth that I have watered with my blood-stained tears
My teardrops will remain embedded, gems of a rich hue.
“I see in the dark night a portent of the coming dawn.
My candle has been put out, but to greet the rising sun.”
[Translated by M. Hadi Husain]
Posted by Khurram Ali Shafique at Thursday, March 29, 2012