ISKANDER MIRZA: The Message of Iqbal 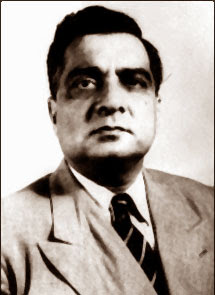 An International Islamic Colloquium was held at Lahore in December 1957. The inaugural address delivered by President Major-General Iskander Mirza on the 30th is being reproduced here from Iskander Mirza Speaks (1997), a compilation by Ahmad Salim. President Mirza may have been a bad ruler who manipulated power towards personal ends, but ironically, the more enlightened intellectuals haven't usually bothered to give us a better summary of the relevance of Iqbal's message for a common person.

International Islamic Colloquium
I consider this a very momentous occasion when eminent thinkers and scholars from all over the world are assembled here to pool their knowledge and thought in an attempt to rediscover the spirit of Islam in the context of modern life. I extend a most cordial welcome to all those who have traveled long distance to honor us with their presence today. I hope they will find their brief stay in this historic city of pleasant and fruitful.
Perhaps I cannot do better than begin by a quotation from our great philosopher-poet, Iqbal, who was one of the most enlightened thinkers to interpret Islam in terms of modern knowledge. “The Prophet of Islam,” wrote Iqbal, “seems to stand between the ancient and the modern world. In so far as the source of his revelation is concerned, he belongs to the ancient world; in so far as the spirit of his revelation is concerned, he belongs to the modern world.”
I have quoted this statement as it contains the essence of a fundamental truth. The fact that Islam is capable of belonging to the modern world makes it possible to recognize that it is a living and dynamic force.
Throughout its chequered history of about 1,400 years, Islam has been one of the most cherished, and at the same time, one of the most misunderstood faiths. The source of this conflict is that Islam is not the name of a personal or inner experience alone. It also seeks to govern and direct the everyday life of not only individuals but of the entire human race regardless of the elements of time, place, color or social status.
It is in its application to practical life in its totality that Islam is apt to become the subject of conflicts and controversies. It is the task not of theologians alone but also of jurists, humanists, educationists and administrators to brush off the cobwebs of these confusions and controversies and reach the real core of what the spirit of Islam implies.
It is an irony of history that, while rejecting the institutions of organized priesthood, Islam has often fallen into the hands of priests. In the term “priest”, I do not include the great saints, mystics, traditionalists, thinkers and other men of piety who form a distinct class by themselves. On the contrary, the organized priesthood in Islam is made up of half-baked and ill-educated Mullahs who for centuries have monopolized the pulpit. On one hand, the Mullah has woven into Islam a crazy network of fantasy and fanaticism. On the other, he has often tried to use it as an elastic cloak for political power and expediencies. The result in both cases is chaotic.
Inside the mosques, the Mullah has made Islam into a fairy-tale immersed in strange superstitions and opposed to all forces of progress. And outside the mosque, he has often made it a pliant handmaid of power politics. If I may presume to say so, Islam was not born to be a captive in the four walls of mosques and castles. It is a fallacy to make it subservient to the imperfections of transient values and expediencies. Islam is too dynamic and too eternal to be imprisoned in the requirements of a passing age. As the intellect of man develops into new dimensions with the discoveries of new avenues of knowledge and science, his understanding of life and religion is bound to grow in similar proportions. What is really changeable and flexible is the human intelligence and not the basic propositions of Islam. Just as there is no finality in human thought, there can be no dead-end in the understanding and application of a dynamic faith.
In any given period of time, therefore it should be our endeavor to focus on Islam the searchlight of new knowledge and thought so that the scholar in his study, the scientist in his laboratory, the tiller of soil in his corn field and the little school girl in her classroom may all be able to understand and derive guidance from their faith in accordance with the spirit of their times.
The disturbed and fast-changing times in which we are destined to live offer a unique setting in which the Islamic principles of universality, fraternity, integrity, mercy, cooperation and goodwill should be brought to light in relation with the affairs of men and nations. The race between the conflicting ideologies of today is bound to end in atomic smoke unless their materialistic frenzy is mellowed by the intercession of spiritual outlook. Islam provides a practical forum for experimenting with the universal peace without weakness and universal freedom without license.
I have no doubt that the deliberations of this august assembly will prove a landmark in the study and appreciation of a most powerful and dynamic movement in the history of mankind.
While wishing you the best of luck in your high deliberations I beg your indulgence to strike a note of caution at this stage. As you know, religion is not a matter of head alone; it also lies deep in the recesses of heart. Faith is the outward symbol of an intense emotion, and emotion as we all know is blind and sensitive. It is our duty to respect it. So, whatever the depth of analytical logic and rational scrutiny, it is desirable that care should always be taken to ensure that the sanctity of fundamental verities is not violated and the tender emotions of simple faith are not hurt. Tolerance is always good. Sometimes it is even a necessity. But where religious susceptibilities are concerned, tolerance is a great virtue and is enjoined by the Quran.
Posted by Khurram Ali Shafique at Sunday, December 11, 2011