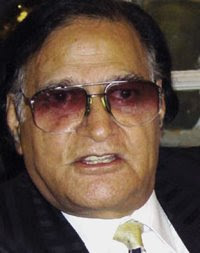 The story of Rashid Minhas is far from over. As you join me in a rare journey into the inner layers of music and poetry, you will see, repeatedly, that just as destiny played a part in the life of Rashid, so it is playing a role in ours too. Just like him, each one of us has written poems which are coming true – and yes, that includes you. Only, you may not have written it on paper, and you may not know that you wrote it. It would be a great pleasure for me to help you see it.

We have looked at the anthem adopted by the Organization of Islamic Conference in 1974. Does it also have a universal message for humanity outside the world of Islam? First, I would like to share with you the work which I have already done on the composer and poet of this anthem.

I had a long interview with Sohail Rana in two sessions in 1993. My write-up about him was published in Dawn two year later and now can be seen on my home page. Since then, I have also analyzed his work on my blog and have received feedback from him on that through email.

Sometime back I analyzed the lyrics of this anthem and the paper was published in Iqbaliyat (Urdu), the research journal of Iqbal Academy Pakistan. Now it can be seen on the home page of Ibne Safi. I had a wonderful time sharing it with Jamiluddin Aali, the great poet who had written the lyrics. I felt very proud when he placed his hand on his chest and said, “These meanings were always in my heart but you have brought them out now.”

Next - Sohail Rana (2) : begin the journey. If you would like receive subsequent posts directly in your mailbox, join the Yahoo! Group (Newsletter) or send email to KhurramsOffice@yahoo.com