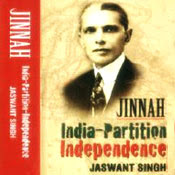 Muhammad Ali Jauhar (1878-1931) believed that an idea introduced in the field of education in India seeps into politics roughly thirty year later. This time, it has taken twenty-five, so Jauhar may not be wide off the mark.

In 1984, two apologies appeared for Jinnah. Pakistani-American scholar Ayesha Jalal suggested in The Sole Spokesman that Quaid-i-Azam (“the Great Leader”) may not have intended Pakistan, using it only as a bargaining chip, while the partition may have occurred due to some mistakes by Nehru and other Hindu leaders. American Orientalist Stanley Wolpert gave roughly the same impression in Jinnah of Pakistan.

Jaswant Singh, formerly of BJP (extremist Hindu political party in India), has now presented the same case, replacing the caution of academics with the forecefullness of a politician. This may not be a change of heart: he has retained his view that Pakistan was a mistake, only shifting the blame from Jinnah to Congress (incidentally the arch-rival of BJP).

This is where he contradicts Jinnah and the people of Pakistan, according to whom the country was created by the vote of the Muslim community of the entire sub-continet in the election of 1945-46. If somebody made a mistake, it were the Muslim masses of the sub-continet, almost unanimously, and not some political leader alone, whether Jinnah or Nehru.

Singh is unlikely to contribute towards good relations between India and Pakistan, which depend mainly on India’s acceptance of its neighboring state. This book doesn’t provide any solid basis for that. On the other hand, it gives an edge to extremist Hindu parties by showing the more egalitarian and secular Congress to be traitor. Singh may have actually prevented the Congress from taking a pro-peace stance in the near future.

Note: The following links to reviews and interviews are being added on an on-going basis. Please feel free to suggest.