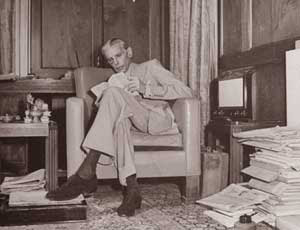 “He was the greatest interpreter of Islam in modern times," Quaid-i-Azam said about Iqbal on March 3, 1941. I am now beginning to realize how profound was his understanding of Iqbal.

In the ‘Quaid-i-Azam Corner’ of the Republic of Rumi, I have added eleven statements of Quaid about Iqbal. In one of these, he says, "DARE AND LIVE is Iqbal's message." What a wonderful motto coming from the founder of the nation on the authority of Iqbal himself!

Also included there is the foreword written by him to Letters of Iqbal to Jinnah (1943). It is a must-read for anyone desiring to understand the thought-processes that went into the making of Pakistan.

In the foreword, Jinnah calls Iqbal "the sage, philosopher and national poet of Islam," explains his contribution in making Muslim League popular in Muslim majority provinces, sheds light on the background of Iqbal's correspondence with him, and then goes on to say:

“I think these letters are of very great historical importance, particularly those which explain his views in clear and unambiguous terms on the political future of Muslim India. His views were substantially in consonance with my own and had finally led me to the same conclusions…”