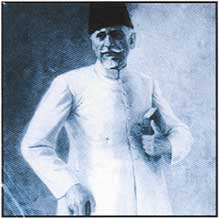 Former president of Indian National Congress and a renowned religious scholar Abul Kalam Azad (1888-1958) spoke to multitudes of devastated Muslims in the grand mosque of Delhi on October 23, 1947.

Unlike Nawab Ismail Khan (see Aligarh Address), Maulana Azad made no reference to recent history. He put his listeners to shame for having voted against his political party - almost declaring communal violence to be justifiable revenge of a powerful majority. Traumas can erase memory, and such messages from rulers at that time may have contributed to a sudden loss of pride among Indian Muslims in co-creating the largest Muslim state.

Do you remember? I hailed you, you cut off my tongue; I picked my pen, you severed my hand; I wanted to move forward, you broke off my legs; I tried to run, and you injured my back…

Think for one moment. What course did you adopt? Where have you reached, and where do you stand now? Haven’t your senses become torpid? Aren’t you living in a constant state of fear? This fear is your own creation, a fruit of your own deeds.

It was not long ago when I warned you that the two-nation theory was death-knell to a meaningful, dignified life; forsake it. I told you that the pillars upon which you were leaning would inevitably crumble. To all this you turned a deaf ear. You did not realize that, my brothers! I have always attempted to keep politics apart from personalities, thus avoiding those thorny valleys. That is why some of my messages are often couched in allusions. The partition of India was a fundamental mistake.