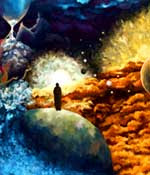 The seven main chapters describe seven stations which seem to be metaphors of stages through which a soul must pass in order to attain its goal. In the end, Iqbal meets God alone. He witnesses a present moment in which past and future are merged together. The course of history is discussed with the Creator, and Iqbal gets to see a vision of Destiny. He faints, but in the ‘Address to Javid’, he tells his son (and through him he tells us) that he is still praying for us in his grave. Does this mean that Iqbal finally attained that immortality which he was seeking? Every reader gets to answer this question on their own.