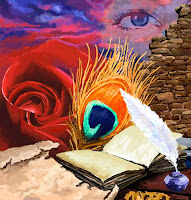 There are three kinds of egos (selves or souls) according to Iqbal:
Ultimate ego is God. Collective ego is a mystery which reveals itself as destiny. Rumi has explained it at length in the opening passages of Volume 2 of Masnavi: “only animals have separate souls, the soul of all human beings is just one.” Saadi later stated it more bluntly as “children of Adam are limbs to one another.”

Islam is one such nation, and hence for a Muslim the way to realize his or her self is by extinguishing their individual self in the collective ego of the nation. This has been explained in ‘Asrar-i-Khudi’ (1915) also but in more detail in ‘Rumooz-i-Bekhudi’ (1918) (both parts together form Asrar-o-Rumooz, the first published book of Iqbal’s poetry).
Posted by Khurram Ali Shafique at Wednesday, September 09, 2009