"What has Pakistan given..." 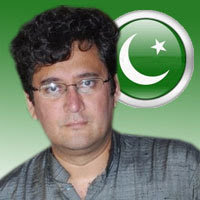 There is an official fan page of the great Urdu writer Ibne Safi (1928-1980) on Facebook. Responding to the Independence Day greetings, an Indian Muslim commented on its wall, “What positive change has been engineered by Pakistan in the Muslim world after its creation, except for providing cheap labor to the Gulf?” I was cool with saying that Pakistan has given Imran Series (Jasoosi Duniya was started while Ibne Safi was still in India), but that was not all according to Sabahat Ashraf, Pakistani analyst living in America and well-known in the blogosphere as IFaqeer ( see picture above and check his blog after this post).

He posted five comments (one was not enough), which are must-read. “I went a little overboard,” he admits. “But we need to have some of these discussions frankly, if we are going to heal the wounds of the ‘batwara’ and move ahead as an Ummah.” Given below are his comments compiled into a single text.

“And what has Pakistan gotten in return from the rest of the Muslim World:

“Yes, we’re in a bad place right now, but are we getting any sympathy from other Muslims? Any help with dealing with the demons we’re wrestling? Take your reaction. You ask what we’ve given, and demand what we’re going to do about it. If you consider us part of a Muslim Ummah you are talking about, shouldn't your attitude be one of sympathy and trying to figure out how to help us in our difficult time?

“Funny thing is, Pakistanis always have a sympathetic attitude to the plight of Indian Muslims and try to think about how to help solve their problems and make life better for them. Ask yourself honestly: is that the attitude of Indian Muslims towards us? And I mean that individually, because I know some Indian Muslims are coming around.

“One last point: one of the demons we are wrestling with is that of religious fanaticism, and Indian Muslims often talk down to us on that issue – “Look what they’ve done to our beautiful religion…” Our societies – Pakistani and Indian Muslim – are not very different and my personal opinion is that you are just a generation behind us on that score but are in denial. The sooner you get off your high horse and deal with the issue, the better it will be for all of us.

Because funny thing is, Indian Muslims are one of the largest and, if you ask me, one of the most important communities in the world in this regard. You have it in you to help find a solution for this issue and make the world a better place for all of us: after all, it is Muslim India that gave us Iqbal and Azad and Jauhar – and, yes, Jinnah.”