This is the 14th chapter in the revised online version of The Republic of Rumi: a Novel of Reality 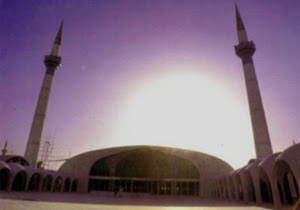 In Lahore, almost nine hundred years before the Poet, lives a great saint Ali Hajveri, in whose nature beauty and majesty have become combined through love. A young man has come from Merv in Persia, and is complaining about being hemmed in by the enemies.

Hajveri replies, “When the stone thought itself to be glass, it became glass and got into the way of breaking. How long will you regard yourself as water and earth? Create from your clay a flaming Sinai. Whoever knows the states of the self, considers a powerful enemy to be a blessing, who awakens the person’s potential. Death is not the parting of soul and body, but to become oblivious of one’s own self. Abide in self, like Joseph.”

In all likelihood, this is a reference to the prophet Joseph rather than the one you are looking for, but the similarity is striking. It is also consistent with the previous chapter where Ali was a man of God as well as a fierce warrior. Here, the saint is teaching a young man to handle the enemy by growing stronger from within. Presently you see a diamond being attacked by a thirsty bird who has mistaken it for a drop of water. “I am not a dew drop,” says the diamond proudly. “I give no drink. I do not live to become a prey.” The bird finds a dewdrop elsewhere and swallows it. Now the Poet turns to you and asks, “Are you a drop of water or a gem?”

The dual themes of power and love, represented by the kings and Sufism respectively, have stayed unified since the chapter on the Divine Vicegerency. Dominions over the outward and inward forces have been interconnected. That unity has been retained in this chapter, but it vanishes as soon as you visit the next.