This is the 16th chapter in the revised online version of The Republic of Rumi: a Novel of Reality 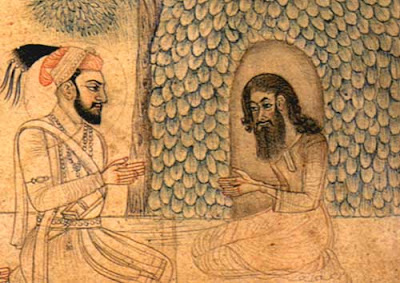 The heading of the next chapter may raise a concern:

Showing that the purpose of the Muslim's life is to exalt the word of God, and that jihad, if prompted by land hunger, is unlawful in Islam

If jihad is unlawful when prompted by land-hunger, does that imply that it is lawful when carried out for the sake of “exalting the word of Allah”? Still, there cannot be wars for forced conversion, since the Shaykh in the previous chapter has told the Brahmin, “I do not bid you to abandon your idols.”

In any case, the heading does not suggest a detailed discussion on the principles of jihad. The emphasis here is rather on that dichotomy between the kings and the Sufism, vanished in the Divine Vicegerency but reappearing here stronger than before.

A king is devotedly visiting Mian Mir, a Sufi in Lahore, centuries after Ali Hajvery. The king is asking the saint to pray for his victory in an impending war of conquest. Just then, a poor disciple arrives and offers a coin to his master. “This money ought to be given to our Sultan,” the Sufi advises his disciple. “He is the most penniless of all human beings since his eye is fixed on the table of strangers. In his self delusion and ignorance he calls pillage by the name of empire but both his own troops and those of his enemy are cloven in twain by the sword of his hunger. The beggar's hunger consumes his own soul but the Sultan’s hunger destroys state and religion. Whoever shall draw the sword for anything except God, his sword is sheathed in his own breast.”

The Sufi has rebuked the king at his face, but you know why the liberty is being taken, and so does the king: the Sufi has “dominion over the outward and inward forces of the universe,” like Bu Ali Qalandar. You have come full circle in the lesson about the self. It started with a contrast between power and love, which was resolved into a unity. The contrast has reappeared now, but you can see more than what meets the eye. Accordingly, the next chapter is a kind of summary, as if things are beginning to move towards a conclusion in this part of the enclave.