This is the 17th chapter in the revised online version of The Republic of Rumi: a Novel of Reality. It concludes Part 1 (out of 7) of the narrative. 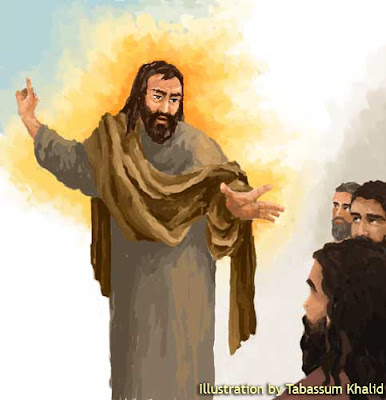 Some precepts written for Indian Muslims by Mir Nijat Naqshband, the Old Man of the Desert

The Poet is nowhere to be seen. Mir Nijat Naqshband, or the Old Man of the Desert, appears instead. His speech is captivating, so that you may even withhold such questions as whether precepts written for “Indian Muslims” also apply to you or for what times were they written. “Since I am acquainted with the harmony of Life, I will tell you the secret of Life,” says the Old Man of the Desert. “To sink into yourself like the pearl, then to emerge from your inward solitude. To collect sparks beneath the ashes, and become a flame and dazzle the world.”

He is dropping hints about why this part of the enclave is called ‘The Secrets of the Self’ and what has been happening here, “secretly”, to you. The clues you brought with you were: (a) Rumi and Iqbal; (b) Kings; (c) Joseph; (d) Sufism; and (e) Time. All except Joseph revealed their meanings in the chapter on Love, but now you may see that they became connected with you as well.

Upon arrival, you left behind all previous knowledge and sentiment. We are usually defined by our knowledge, experience and specific biases, so what were you after suspending these? You were just your “self.” Poetry remains an arrangement of words as long as it is approached through mind but when your “self” interacted with it, poetry became this garden: words became a world, and the world is real enough for you to interact with it. This is what the heading of the first chapter told you: “the system of the universe originates in the self…” If you take the Garden as a universe in miniature, this entire system originated in the “self”.

This happened because you had an “ideal”, which was to find Joseph, showing that the life of the self comes from forming ideals and bringing them to birth. Your presence in the Garden was realized through your quest and you didn’t weaken it by asking for a readymade answer, showing that the self is strengthened by Love and showing that the self is weakened by asking. You are now gaining control over the forces of the Garden by becoming familiar not only with its form but also the principles on which it has been structured, showing that when the self is strengthened by Love, it gains dominion over the outward and inward forces of the universe. The process itself is a refutation of the Sheep’s Doctrine as well as the philosophy of Plato: your very passing through the Garden is a thing concerning the true nature of poetry and the reform of Islamic literature.

“Joseph” still remains a mystery, but in the chapter on Ali, you had felt that it must be connected with mastery over one’s own physical existence, which comes through “educating” the “self.” Now you can see that you followed rules, exercised control and this virtual reality sprung up from the seed of your imagination, showing that the education of the self has three stages: obedience, self-control and Divine Vicegerency, and setting forth the inner meanings of the names of Ali (“Whosoever in the world becomes a master over one’s own clay turns back the sun from the west”). The story of the young man and Hajveri, and the parable about a bird and the diamond, were about your moral strength. Here is a potential which you can sense, but which still defies complete understanding.

“Sufism” was a metaphor for opening the door of the world with the key of religion, and their antithesis was the Brahmin who had cut himself off from the society, and had become ensnared by his own thought. That is your state, where reason is isolated from other faculties, like a sword taken out of sheath for worldly gains: Whoever shall draw the sword for anything except God, his sword is sheathed in his own breast.

This is not the way of the Sufi, and the Old Man intervenes again. “Have you heard how Mawlana Rumi gave lectures on philosophy at Aleppo?” He asks you, and goes on to describe the state in which Rumi used to be prior to meeting his mentor, Shams Tabriz. This was not very different from the Brahmin you saw a while ago. “Fast in the bonds of intellectual proofs, drifting over the dark and stormy sea of understanding, a Moses un-illumined by the Sinai of Love, ignorant of Love and of Love's passion! He discoursed on skepticism and Neoplatonism, and strung many a brilliant pearl of metaphysics. He unraveled the problems of the Peripatetics, and the light of his thought made clear whatever was obscure.”

In a vision from another time, you see a young Rumi, unmindful of the secrets he would later impart to the world. He is lecturing, while a heap of books lies nearby. A qalandar appears and you recognize him as Shams of Tabriz, the future mentor of Rumi. He interrupts the lecture by asking rudely, “What is this noise?” Rumi reprimands him by saying that this is something he might not understand. Shams casts a look at the heap of books, and a fire emanates to burn them all.

This is the beginning of Rumi’s journey on the path of Shams, and now the Old Man addresses you again. “You have drawn your substance from the snow of philosophy. The cloud of your thought sheds nothing but hailstones. Kindle a fire in your rubble, and foster a flame in your earth.”

Joseph, whom you are searching now, didn’t belong to Rumi and Iqbal only. He must have come from Shams, but this is not why Shams has appeared before you at this point. The purpose of this vision is to remind you about the connection of Shams Tabriz, not with Joseph, but with you. Your books were burnt, for real, not very long ago. When you agreed to suspend your previous knowledge upon entering the Garden, it was the burning of your books, but you didn’t do it. Shams did.

The Garden was created by the Poet on the direct command of Rumi, who in his times had been inducted by Shams. Since it all started with the burning of Rumi’s books by Shams, it is not a coincidence that you were asked to do the same upon arriving here: Shams can transcend “Time”, your last clue. The Garden may be a virtual construct, but it is connecting you with something more real than you may have suspected.