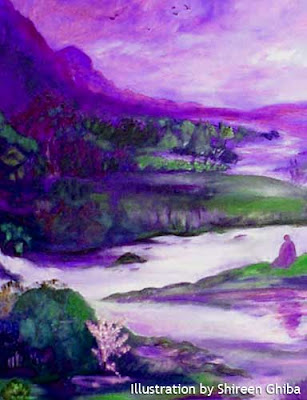 This is the 15th chapter in the revised online version of The Republic of Rumi: a Novel of Reality

The dual themes of power and love (represented by the kings and Sufism respectively) had remained unified since the chapter on Divine Vicegerency. That unity vanishes as soon as you arrive at the next chapter.

The parable of the Shaykh and the Brahmin

You meet an unnamed Sufi, a “Shaykh” (mentor in Persian). He is not alone. A philosophical Brahmin is listening to his discourse.

“O wanderer in the lofty sky!” The Shaykh is saying to the Brahmin. “Pledge yourself to be true, for a little, to the earth. I do not bid you to abandon your idols. Are you an unbeliever? Then be worthy of the badge of unbelief. O inheritor of ancient culture, do not turn your back on the path your fathers trod! If a people’s life is derived from unity, unbelief too can be the source of unity. You who are not even a perfect infidel are unfit to worship at the shrine of the spirit. We are both far astray from the road of devotion: you are far from Azar and I am far from Abraham.”

Azar was the sculptor father of the idol-breaking prophet Abraham, who founded the Holy Sanctuary of Kabah in Makkah. As an early preacher of Unity, Abraham also represents the principle of non-contradiction which you are now following in the Garden. However, the point here is not so much the difference of religions (“Unbelief too can be the source of unity,” the Shaykh has said). The real conflict seems to be between mind and heart, heaven and earth, perpetual hunt for novelty and loyalty to one ideal. The Brahmin seems to represent the mind. He has acquired a taste for unrestrained speculation but has lost the desire for giving birth to an ideal. The life of the self is possibly only through forming and giving birth to ideals but sometimes an ideal may require longer than a lifetime, in which case the next generation would do better by discovering the same ideal in the depth of its own conscience -- unbelief too can be the source of unity – so that the goal is achieved. This is what is lost when the mind is left unbridled in its quest for novelty.

As you stand in this chapter pondering over the relationship between the individual and the society, the snow-clad peaks of Himalayas appear in front of you. The mighty river Ganges, starting here as just a little stream of running water amid the hills, taunts the highest mountain: “O you covered in snow since eternity! God made you a partner in the secrets of heaven but deprived your foot of the power to walk!” The mountain answers, “Your water holds a mirror to me but within my bosom are a hundred rivers like you. Your graceful gait is an instrument of death, for whoever goes from self is bound to perish. O you, who have made yourself an offering to the ocean, be self contained like the rose in the garden and do not run after the florist in order to spread your perfume!”