Moving on from Partition

I was in Delhi in December 2007, attending a seminar at one of the leading academies of Urdu literature in India. The chief guest was a Muslim socialist leader who found it utterly necessary to look in the direction of Pakistani delegates and proclaim, “We the Muslims of India think that partition was a mistake. South Asia would have been better off without it and therefore Pakistan should not have come into being.” 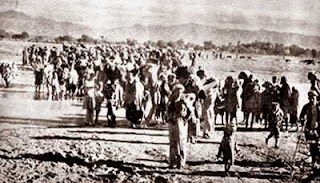 Of course the right answer to that is, “Go get a life.” Unfortunately getting a life is not always easy, and the book of Jaswant Singh has given cue to the same hypocritical chest-thumping again: “Events of 1947 haunt everyone in South Asia…” In that case I must be an exceptionally lucky guy since they don’t haunt me. Maybe I should give a helping hand to others in moving on too!

In the previous post I presented excerpt from a speech delivered by Nawab Ismail Khan at Aligarh University soon after partition. It may never have been published anywhere before (except possibly in some newspapers in 1947). I got it from Mr. Asad Ismail, the grandson of Nawab Ismail Khan.

The speech is important because it shows us that according to the vision of the creators of Pakistan (one of whom was Nawab Ismail), there was going to be continuity in the history of Muslims in India: Sir Syed Ahmad Khan had shown how they could be loyal to alien rulers and still develop their national identity to the extent where it gave birth to a sovereign state. The same loyalty could be transferred to the independent state of India once it came into being.

This also shows that when Muslims of the Sub-Continent demanded Pakistan they fully realized that many of them would stay behind in India as minority. Since Pakistan was a democratic demand affirmed through fair and free election, they had the right to expect that it shouldn’t be held against them.