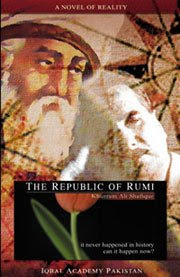 A frequently asked question is why Iqbal chose Rumi as mentor. Iqbal's own answer would be that he didn't. Rumi chose him. "The candle rushed onto the moth," he says in the prelude of his first book of poetry. Some biographical evidence explains this (and has been brought to light in my recently published Iqbal - Tashkeely Daur).

When studied in the light of guidance from Iqbal, the central message of Rumi turns out to be that idea can become reality. That happens to be the gist of Iqbal's message as well (and incidentally he is the only poet whose imagination gave birth to a real country on the map of the world).

Hopefully, this may also explain why this blog is called The Republic of Rumi while so much of it deals with Iqbal and related concepts - and why there is a symbolic tomb of Iqbal in the family graveyard of Mevlana Rumi in Konya (dust from Iqbal's real grave in Lahore was taken and buried just outside the entrance to Mevlana's own mausoleum, with Iqbal's name written on the tombstone).
Posted by Khurram Ali Shafique at Sunday, August 02, 2009