This is the 21st chapter in the revised online version of The Republic of Rumi: a Novel of Reality. 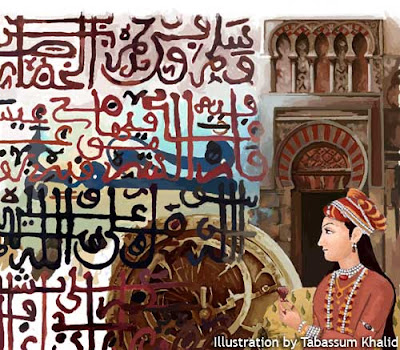 Mawlana Rumi greets you again as you enter the second part, which is called ‘The Mysteries of Selflessness.’
"Strive,” says the Mawlana. “And find yourself in selflessness. This is the easy path, may God know better.”
His terse one-liner tells you that he has been watching over your progress, or is at least familiar with it since your initiation where he greeted you the last time. Still, his welcoming note to this part sounds ironic since you were just beginning to feel at home in the Garden through realizing the fact that you discovered your “self” here, and Rumi has shifted the emphasis from “self” to “selflessness” already.
In this part of the enclave, the prelude is preceded by a Dedication:


Dedication to the Muslim Nation
Instead of Naziri of Nishapur, who greeted you after Rumi in the other half, you see Urfi of Shiraz standing at the entrance. He was also a Persian poet but he died young and has an unusual youthfulness about him. “Question me not when I speak of love,” he says. “If I may not have tasted this wine, someone else must have.” Apparently he is referring to the relationship between an individual and the collective life.
Unlike the previous part, where the Poet seemed to have been waiting just for you, he seems to have forgotten you now. He is addressing the Muslim Nation the way Majnun would have addressed Layla (but then, that love tale was also an allegory about an individual and the collective ego). “You, who were made by God to be the Seal of all the peoples, so that all beginnings may end in you,” he is saying. “Your saints were like prophets, whose wounded hearts wove souls into unity. Why are you now fallen so far astray from the Holy Kabah, all bemused by the strange beauty of the Christian’s way? My fellow-minstrel sang the epiphany of alien loveliness, but I am enamored by your charm and beauty, for you are the beloved of our Prophet. Since love first dwelled upon my chest, by its flame my heart was molten to a mirror, which I now hang in your sight that you may gaze on your own beauty therein. See and you shall become a captive fettered in your tress’ chain!”
In the other stanza, the Poet speaks mainly about himself. “When God created me at Time’s first dawn,” he says. “A lamentation quivered on the strings of my melodious lute and Love’s secrets stood revealed in that note. Love, like the tulip, has one brand at heart and on its bosom wears a single rose.” He takes this rose, the only one that was ever his own, and pins it upon the turban of the Nation. He hopes that the Nation shall wake up from slumber and tulips shall blossom again from its earth, breathing the fragrance of the breeze of spring.
The next is the Prelude. Here, the Poet starts addressing you again. “The link that binds the individual to the society is Mercy,” he says. “The true self of an individual cannot achieve fulfillment without society. The individual holds a mirror to the community, and they to the individual, who is a drop that becomes an ocean through them. The community is strong and rich in ancient ways, a mirror to the past and the future. Like Eternity, it is the link between what is to come, and what has gone before.” This is clearly a reference to Time, the fifth clue about Joseph. In fact, the Poet’s concept of nation comes very close to what Joseph can possibly be: something connected to Rumi, Iqbal, power, love and a link between past and the future – Prophet, kings, Sufism and Time. Still, Joseph cannot be a metaphor for the Muslim nation, since it was present before everyone’s sight even when the Poet said, “My Joseph is not for this market.”
“You, who have not known self from selflessness, have lost yourself in illusions,” he says to you in the second stanza. “Within your dust there is an element of light, whose single shaft illuminates your whole perception, all your joy derives from its enjoyment, all your sorrow springs from its distress.” He is obviously referring to your “self”, of which you are becoming increasingly aware in the Garden, but there is a catch, as he points out now. “The constant change and turn of this inner light keeps you alive but it is one, and as such it brooks no duality. Due to its radiance, I am I, and you are you: nourishing pride in meek humility, this flame sets a fire alight. Its nature is to be both free and bonded. It is a part, but has the potential to seize the whole. I have studied it carefully and have named it selfhood and Life. Whenever it comes out of seclusion, its heart is impressed with the other. Then ‘I’ is dissolved and converts into “you”. It loses its freedom of choice to become rich in love. As long as the pride of self pulls its own way, humility is non-existent. Hold back pride, and humility will come into being. The self negates itself in the community, so that it may be a petal no more and become a rosary.”
Then he quotes from Rumi, “These subtleties are like a sword of steel. If they defeat your wit, be gone already!”
Posted by Khurram Ali Shafique at Wednesday, April 07, 2010