This is the 26th chapter in the revised online version of The Republic of Rumi: a Novel of Reality. 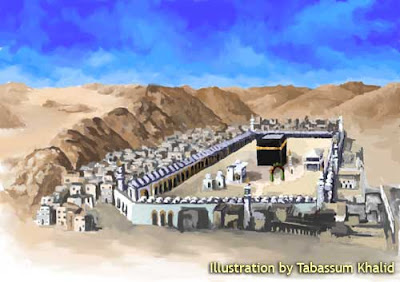 It was to change such a world that you first wanted to find Joseph. The nine segments of ‘A Parable Never Told’ held out a promise, just as the next nine chapters in the Garden present a brand of nationalism somewhat different from the legacy of Machiavelli.

1
Showing that the Muslim nation is timeless, since its survival has been divinely promised

It’s an unknown time at the beginning of the world. Souls have been gathered and now the Creator asks them, “Am I not Your Lord?” They all answer, “Indeed, You are.”

Flames rise to burn Abraham, who has been cast in the fire by Nimrod, the king of Mesopotamia, for preaching the Unity of God and refusing to respect idols. God commands the fire to turn cold, and Abraham survives to visit Makkah and pray with his son Ismail, “Our Lord! Make us both Muslims, bowing to You, and of our descendents a Muslim nation, and show us our place of worship, and turn to us, for surely You are Oft-Returning, the Merciful.”

Mongols ravage the Muslim world. After five hundred years of holding sway over, Baghdad is sacked by the barbarians and its libraries drowned in the waters of the River Tigris in 1258 (eleven years after the meeting of Rumi and Shams of Tabriz). Like phoenix rising from its ashes, or like Abraham coming out the fire of Nimrod, the Muslim nation rises again to new grandeur and glory. “Love lives on through the glow of our hearts, though they are congested like a bud,” says the Poet. “If we die, the Garden will die too.”

In the Garden, you hear the songs of the nightingale, the blossoming of flowers and the meadow bathed in the soft tear of dawn. Flowers wither and shed their petals, spring is followed by autumn, but the Garden stays on to welcome another spring. Individuals, born of dust, die. Nations, born of a brave heart, live on and welcome new individuals. Sixty years are a lifetime for the individual, but a century is a short span of time in the life of a nation: its life perpetuates through history, which is to a nation what memory is to an individual.

“Surely, We have sent down this Remembrance, and surely We shall be its guardian,” says God about the Quran in Verse 9 of its Chapter 15. In that line is a promise that civilizations may come and go, but the Muslim nation is there to stay.

You hear the Quran being recited: the text coming out through a melody that remains untouched by shallow interpretation, conceited translations and inadequate commentaries.

Showing that in times of decadence, conformity is better than speculation

Jerusalem is destroyed forty years after the departure of Jesus Christ. After another sixty-two years, the Roman Emperor starts building an idol house over the ruins of the ancient temple of David and Solomon. Jews, descending from the other lines of Abraham (including the heirs of the prophet Joseph), have to move out and become scattered over diverse regions. The memory of Moses and Aaron lives with them, and the songs of David resonate in their hearts, and this preserves their existence as a nation against all odds. They survive.

If by some mistake an enemy presumes a truce when there is none, the Shariah, or the Divine Law, requires that Muslims must wait until the enemy has reinforced its defenses which it had dismantled due to the misunderstanding: life is not living except we live dangerously.

Sheikh Ahmad Sirhindi, one of the greatest Sufis of all times, is speaking to a disciple in the seventeenth century India. “Be careful about Persian fantasies,” says Sirhindi. “Their imagination is unmatched but they transgress the boundaries established by the Shariah.”

“Seek no other meaning in the Divine Law except the evident,” the Poet says to you. “There is nothing except light inside the gem.”

A beggar is being too persistent at the door of a certain house. It is Sialkot, in British India, at the end of the nineteenth century, and the Poet as a young man lives inside that house. He breaks his staff on the head of the beggar but his old father, with tearful eyes, says to him, “On that Day when the followers of the Prophet are gathered before him – martyrs, heroes, saints – this beggar’s cries will also be heard there, and what am I to say when the Prophet asks me, ‘God committed to you a young Muslim, and was it too hard for you to teach him some of my manners?’” The Poet feels shame and remorse, and his father recites from Rumi: “Do not sever your life from the last Prophet. Do not trust your abilities too much!”

6
Showing that a nation requires a physical center, and the center of the Muslim nation is the Holy Kabah

Abraham and his son Ismail are raising the foundations of Kabah in Makkah and praying, “Our Lord! Accept from us, surely You are the All-Hearing, All-Knowing. Our Lord! Make us both Muslims, bowing to You, and of our descendents a Muslim nation, and show us our place of worship, and turn to us, for surely You are Oft-Returning, the Merciful.”

7
Showing that true solidarity comes from adopting a common ideal, and that the ideal of the Muslim nation is preservation and propagation of Unity

The Prophet was leading prayers when God commanded him to change the direction of the qiblah from Jerusalem to Makkah, you are told. The hypocrites found this difficult to comply with.

“Thus We have made you a Middle Nation, that you may be witnesses over nations, and the Messenger a witness over your,” says God in Verse 143 of Chapter 2 of the Quran. “And We appointed the Qiblah to which you were used, only to test those who followed the Messenger from those who would turn on their heels. Indeed it was momentous, except to those guided by Allah. And never would Allah Make your faith of no effect. For Allah is to all people most surely full of kindness, the Merciful.”

Adam has been created just now. Many things are placed before angels for them to name. They cannot, but Adam does. God commands the angels to bow down to Adam.

9
Showing that the perfection of national life is when a nation becomes aware of its selfhood just like an individual, and that the propagation and perfecting of this awareness is only possible through preservation of national history

An infant recognizes its mother but as it grows up, it begins to recognize others too. Memory records the data and helps the child to become a personality: without memory, an individual would be someone different each moment and there would be no awareness of “I.” The same is the case with a nation.

In the Dedication, you saw a graceful figure lying asleep. That was not a metaphor. The Muslim nation is a personality, and it is real.