This is the 28th chapter in the revised online version ofThe Republic of Rumi: a Novel of Reality. 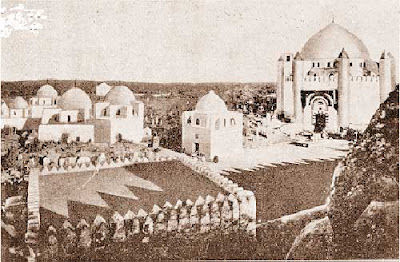 The next three chapters are rooted in the awareness that the solidarity of the Muslim nation rests on its hold on an ideal, unlike territorial societies that rest on a concrete thing, i.e. their country.
Showing that the continuance of the species derives from motherhood, and that preserving and honoring motherhood is the foundation of Islam
The word for motherhood is umoomat, which comes from the same root as ummat, which means a nation or a community of the followers of a prophet.
“Stars without number whispering No god but God, hidden in Time and not yet raised from nonexistence, wait outside the boundaries of quality and quantity,” says the Poet. “This garden of possibilities, these unseen tulips, blossom from the bower of motherhood. A people’s wealth rests not in gold and silver but its riches are its children, clean-limbed and strong of body, supple-brained, hard-laboring, healthy and nimble to high enterprise.”
The perfect role model for Muslim women is Fatima, the Prophet’s daughter
Fatima was the daughter of the Prophet and was married to Ali. She was the mother of Hasan, who forewent his claim to caliphate in order to reconcile the warring faction of the nation. The other son of Fatima was Husain, the mystery of whose sacrifice was revealed a while ago. She led a simple life, taking pride in poverty just like her father.
“The Divine Law prevents me,” says the Poet. “Or else I had surely gone about her tomb and fallen prostrate, worshipping her dust.”
Address to Muslim women
“High, high the cravings are that wrestle within your soul,” the Poet addresses Muslim women. “Be conscious still and keep your eye on Fatima as a role model, so that your branch may bear a new Husain and our orchid blossom with the Golden Age.”
Posted by Khurram Ali Shafique at Saturday, April 17, 2010