This is the 27th chapter in the revised online version of The Republic of Rumi: a Novel of Reality. The collective ego is formed when a people learns to remember its past. The Garden of Poetry is doing the same and hence it is acting like a collective ego of which the reader has become a part. 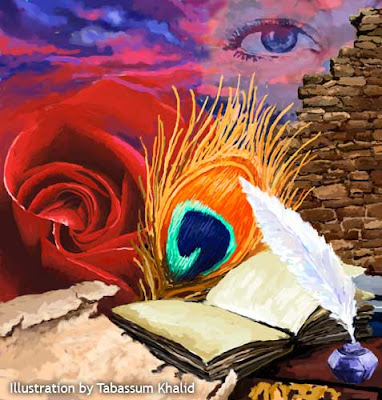 The Muslim nation is a real personality, just like an individual. How does a nation become a real collective ego? In the same manner in which an individual acquires a personality, the Poet tells you.
Initially a child recognizes only its mother but then begins to recognize others too. With memory, it achieves a sense of self. Now the child learns to remember and hence yesterday becomes linked with today, which in turn is linked with tomorrow. Without the faculty of remembering, there would be no sense of self and no learning about the world would be possible: if you are sitting in a room with a friend but after leaving the room you cannot remember whether you were the person who remained seated or the one who got up and walked towards the door, how will it be possible for you to know whether gets out of the room automatically by remaining seated or by walking towards the door?
The same is the case with a nation. It becomes a collective ego by preserving its history. An individual may get up and leave the room in just a few moments but in the case of a nation, a process started by one generation can easily require several generations to finish it. If each successive generation keeps forgetting what ideals were adopted by the previous generation, such forgetfulness could mean for the nation the same thing as if a person fails to remember himself or herself from the previous moment. A nation without history is like an individual suffering from amnesia and asking every stranger melodramatically, “Who am I?”
By preserving its collective memory, which is history, a nation achieves a collective ego. The same is true of the Garden: at each step it seems to know the stages you have passed through, since its interaction with you is building up on your previous experiences here. This is one the mysteries of the Garden. It remembers.
The Muslim nation is not just the group of individuals who call themselves Muslim. Those individuals are members of the Muslim nation but the nation itself is an entity, just like the Garden, which remembers what stages have been traversed by each generation. Hence it interacts with each successive generation, offering them what is required at that very step – just as the Garden is doing with you. It is an entity just as mysterious as the Garden. It remembers.
Another way of understanding this entity is to call it “the Human Spirit.” Its existence is based on that incident long ago when all souls were gathered and the Creator asked them, “Am I not Your Lord?”
Posted by Khurram Ali Shafique at Thursday, April 15, 2010