This is the 29th chapter in the revised online version of The Republic of Rumi: a Novel of Reality. It offers a summary of the philosophy of Muslim nationhood in the light of Surah Ikhlas (Chapter 112 of the Quran) 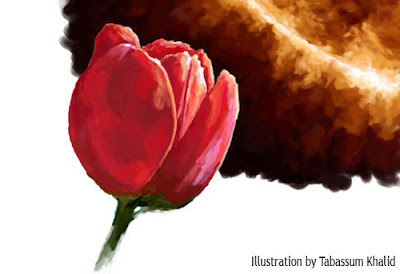 Abu Bakr was one of the closest companions of the Prophet, and the Prophet is reported to have said about him, “I am indebted to Abu Bakr more than to anybody else regarding both his companionship and his wealth.” He was also the first of the four rightly guided caliphs who succeeded the Prophet.

Now he offers four practical tips for Muslims through commentary on ‘Unity,’ Chapter 112 of the Quran, which consists of four verses.

“You call yourself Turk, Afghan and so on,” says Abu Bakr. “Become one, and let the Unity be seen.”

Harun Rasheed, the famous Abbasid Caliph has just defeated the Byzantine Emperor. Now he wants to study the sayings of the Prophet and summons Imam Malik, the renowned expert in the field, to Baghdad. Malik lives in Madinah, the City of the Prophet. He replies, “Love says to me, ‘Obey me and do not sign the article of service even to kings.’ I cannot wait on your door to teach you, but you are most welcome to come here and sit with the rest if you wish to learn.”

“You are Joseph,” says Abu Bakr. “Do not lower your value by accepting bounties. An individual attains individuality by becoming self-aware and a nation attains nationhood by spurning the whim of others.”

He has no offspring, nor was He begotten by anyone

Salman is a devoted Persian whom about whom the Prophet has declared, “He is a member of my family.” Arabs are extremely conscious about pedigrees, and fanciful stories are circulating about Salman’s background, some tracing it back to the nobility of Persia. People ask him his lineage. He replies, “I am Salman, the son of Islam.”

“Racial identity is related to the body and love to the soul,” says Abu Bakr. “Therefore, love is more permanent. If you love the Prophet, then do not take pride in race, color, tribe and territory.”

A solitary tulip has sprung on the top of a mountain. Its color has gathered fire from the morning breeze, so that the sky regards it as a star left behind, and offers itself as a backdrop. The first ray of the Sun kisses it and the dewdrop wakes it up by washing its face.

“This is an analogy of the Muslim nation,” says Abu Bakr. “Be unique in the world, for you have got the Quran.”